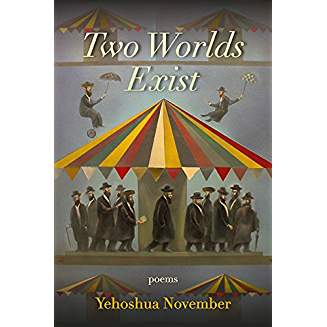 Yehoshua November’s second collection, Two Worlds Exist, resembles his first, God’s Optimism, in terms of the ease with which the life of faith is integrated with the life of poetry. As we move further into the twenty-first century, religious belief has both declined substantially and continues to be contentious. Poetry—or any literary writing—which takes faith seriously must confront two temptations, to ignore the secular world and become pietistic, or to prioritize the secular world and become defensive. Neither of these stances is good for literature, and fortunately, November evades them both. He writes of his faith tradition as naturally as he writes of his children, his ancestry, his teaching.

Several of the poems address November’s young daughter’s hearing loss. He grieves that circumstance with the desperation common to parents who wish only to protect their children. He contextualizes the poems describing that experience by writing about one of his father’s more extreme parental losses in “Conjoined Twins.” November’s father was a physician whose wife had just delivered stillborn conjoined twins, “Two bodies / and one heart.” Other physicians plan to use the bodies of these infants as an opportunity for teaching, so

Early the next morning, another Jewish resident
stood over the bodies with my father,
performed the ritual circumcisions in the silence
of an unoccupied delivery room.
“Choose names you would not otherwise use,”
the rabbi had instructed on the phone.

What should have been a joyous occasions has become somber, one whose meaning is unclear, even to the faithful and scientifically trained father. The rabbi drives the father from his faith with the age-old suggestion that evil visits those who lack sufficient faith. The poem, though suggests a different interpretation, one which situates these boys imagistically within their tradition:

“I looked quickly
and saw them embracing,”
my mother later said
of the two boys, who were to be born
between Purim and Passover.

One was named Mordechai,
who gathered all the Jews
when they thought they had been forsaken.
And one was named Pesach,
the holiday when all Jews,
even idol worshippers,
were freed,
as long as they desired to go.

And they left their bondage
and arrived at the mountain
where, the Midrash states,
they camped in the desert
like one man
with one heart.

A poet’s interpretation of events does not rest in explanation but in description, in representation, in the image. Poets gather meaning from the concrete, as November does here. He may not have been able to satisfy his father’s desire to know why any more fully than the rabbi had, but he is able to use his poet’s attention to interpret the event very differently, placing the boys within the very foundation of Jewish tradition, the freedom marked by Passover.

Other poems are more joyous. November includes several that recall his first sighting of and experience falling in love with his wife. In these poems, he recognizes the sacredness of marriage, of one soul’s longing for another, but he also recognizes that body and soul are complementary, each allowing the other insight into our human existence. In “The Life of Body and Soul,” November links his own life to Chassidic tradition and to scriptural interpretation. “Yaakov is the soul, and Aisav is the body,” he says, and then recalls a recording he’d heard years before:

I heard a crackling silence,
and then an old rabbi said, The soul
is God’s greatest opponent. It wants
always to break free of the body,
leaving the world barren of holiness.

In dualistic religious traditions that separate body from soul, interpreting them as opposing forces, we are so often taught that it is the body that craves, that carnal experience leads us to sin, that purity resides in the soul. So it is startling to read, as I imagine it was to hear, that the soul craves too, and that holiness enters creation through incarnation.

After the reference to the world’s barrenness above, November alludes to the story of Hannah praying for a son before turning to his own desire:

And the laws of prayer mirror her prayer—
her desire reflecting His desire
for the life of souls in bodies.
And, sometimes, the mystics say, the body’s desire
is really the soul calling out from underneath—
Yaakov reaching into the world
with Aisav’s hands
for the lot the soul has descended to sanctify.
And always, that ascetic, the soul’s high priest,
mistakes the body’s desires for nothing more.
So that when, for example, I saw you standing
at the soda machine in college, and my body was awoken,
the high priest of my soul,
having just returned from a year in the Holy Land, said,
This is just a young man’s desire
for a young woman with long dark hair.
But in the body’s version, there are five Jewish children
and our life together.

“The body’s version” exceeds the body. “A young man’s desire,” like Hannah’s desire, reproduces God’s desire for creation. I appreciate this poem for its insights, but also for its tone. As the poem explores its subject, observing body and soul from multiple angles, it produces its own insights. Its subject is revealed as the poem unfolds, as gratifying to the writer, I suspect, as to the reader. The best poets explore questions rather than provide definitive answers, and this is what November does here.

Yehoshua November is an extraordinary poet whose books are worth waiting for, but I hope not to have to wait very long for the next one.