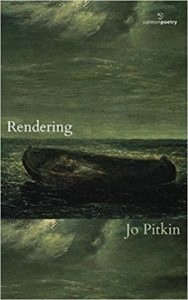 Jo Pitkin’s most recent collection, Rendering, will challenge some readers—at least it did me—not because its references are unduly obscure or because its style is irritatingly inaccessible under the guise of experimentation, for neither of these qualities is true of the book, but because of some ethical choices the speaker makes. The poems in Rendering examine a love affair between the speaker and a married man. As a reader, my initial response to this fact was judgment rather than sympathy, yet Pitkin’s exploration of the relationship is so honest and full and avoidant of self-pity that I became increasingly sympathetic with the speaker, even though this relationship between a single woman and a married man ended just as many similar ones do. For the speaker, the operative word in the phrase “love affair” is “love,” and the relationship retains a permanent effect, as evidenced by the book’s arrangement into sections: “Before” (by far the shortest), “During,” “During,” “After,” “After,” “After,” “After.”

Most often for me, the success of a collection of poetry depends less on its content than on its craft. Most often, when I am additionally attracted to poetry because of its content, it’s because I already share an allegiance with or interest in the content. I am already, therefore, part of the author’s intended audience. Not so here—Pitkin needed to overcome my resistance to her content through her skill with craft, and that she did.

Here is “In Love,” the opening poem in the first “During” section, in its entirety:

Everything, everything—our afternoons,
the awful clock ticking on a nightstand,
the key to a room with its mirror and bureau,
the borrowed sheets, the beige drapes framing a view
of the thin river and the arched bridge,
the torn corner of the Daily Register,
the open copy of The End of the Affair,
the radio playing a Brahms piano trio,
the coffee mug marked with its copper ring,
the squat water glass clotted with red wine—
everything kept in that room’s narrow gallery
where we were never two but always three
has now resolved to dust and in motes flown by
yet quivers and pulses always in the mind’s eye.

This poem is reminiscent of a sonnet (if, like me, you define “sonnet” narrowly) and exploits several of the opportunities a sonnet provides. Many of the lines are almost yet not quite iambic and almost yet not quite pentameter. True rhyme occurs only with that absolute last click of the final couplet, but many of the other words occurring at the ends of the lines subtly echo each other. This choice is often the better one in contemporary American poetry, when regular true rhyme can so quickly become heavy-handed. We hear the muted echo of “afternoons,” for example, in both “bureau” and “view” and of “bridge” in “Register.” The meaning of “afternoons” is somewhat wittily contradicted by “nightstand” in the next line. Slight alliteration, assonance, and consonance occur throughout the poem, with “clock ticking, … key,” “borrowed …beige…bridge,” “beige drapes,” “torn corner,” “mug marked,” “coffee…clotted,” and other instances. The sonnet’s classic turn begins in line nine, as Pitkin begins to rely on the much harder consonant sounds and a more insistent monosyllabic rhythm than had occurred in the first eight lines. In terms of meaning, the turn takes full hold in line eleven, after the list of objects populating the room has concluded. Line eleven begins as did line one, with “everything,” and it concludes by describing the room as a “gallery,” not a place where events occur but where objects are displayed and observed. The next line contradicts readers’ expectations by manipulating a cliché. The more common description of lovers, especially when they marry, is two become one. Here, however, “we were never two but always three.” The two never have absolute privacy because of their constant awareness that their love forms a triangle, the third one perhaps excluded but never absent. The knowledge of the end of the relationship is never quite absent either, for even here at the beginning of “During,” everything becomes dust.

Two poems earlier, the speaker says that “Low dust devils skitter by. / Something sharp catches in my blue eye.” That uncomfortable sense is repeated here in “In Love,” though it is only the “mind’s eye” that perceives the dust. Yet the memory “quivers and pulses” as if still alive. This poem, accessible as its language is, is nevertheless dense with meaning. It succeeds on multiple levels, from individual word choice to theme.

Many of these poems demonstrate Pitkin’s skill with craft, and particularly her skill using and adapting received forms. She has clearly trained her ear as well as her eye. She understands the value of received forms as well as free verse, not simply well enough to compose in a variety of forms, but deeply enough to borrow some of a form’s expectations without bowing to their encumbrances through thoughtless obeisance. These poems benefit from Pitkin’s knowledge of the long tradition of received forms in English poetry, the increasingly long tradition of free verse, and the practice of inventing new forms by poets of every century. Throughout the late 20th century, “formal” and “free” were considered opposing terms, and most poets skilled in one tradition were inept in the other. We’ve passed through that moment. In the integration of these traditions lies the future, I suspect, of much American poetry.