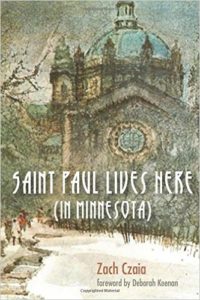 Zach Czaia’s Saint Paul Lives Here (in Minnesota) is an examination of betrayal by individuals and institutions, of innocence and guilt, and of forgiveness—which doesn’t come easily and sometimes doesn’t come at all. The poems in this collection accomplish a difficult task—succeeding as poems, attentive to their craft, despite the temptation their content provides to rant or sermonize. Many of the poems address the sexual abuse scandal that erupted within the Roman Catholic Church several years ago, not only the harm caused by individual priests to individual children, but more appallingly through the complicity of bishops and other powerful men who serve one of the most powerful organizations on the planet. Despite this content, the poems aren’t confessional so much as inquisitive, and their emotional pitch ranges from outrage to dismay to, occasionally, relief. Significantly, the collection also includes poems whose central commitment is love—of spouses, parents and children, siblings, friends, and of the speaker for God.

One of the poems that thematically anchors the collection is “Memories of Father X,” composed as a four-part sequence reminiscent of sonnets. The speaker served as a lector during his school days, and the poem addresses his physical proximity to both Father X and the altar during mass. Section ii explores the complexity and paradox of sacrament:

Death poured out his mouth along with the gospel,
teeming with its interest for life. The blood
of Christ in the cup, raised, and my friends
on the altar ringing their bells at the priest’s raising
of the cup and all of us staring.

beneath our chins to catch the crumbs of Christ, our tongues
extended to the host like waves, licking God
then lapping back to rejoin the sea, our seats
on the altar…

Thematically, this poem is complex, linking as it does the gospel, which translates literally as “good news,” with death. Literally, the eucharist is linked to the death and resurrection of Christ, but participation in the eucharist is understood to bring life to the people. Here, Father X breathes death as he consecrates the wine, breathing out death upon the people even as they are in life.

Poetry, though, needs to be more than theology even if its impulse is to express theology. Here, Czaia exploits the capacities of English so that his language is at least as memorable as his ideas. The excerpt I’ve quoted relies on alliteration (raised/ringing/raising, catch/crumbs, like/licking/lapping) and assonance (blood/cup, crumbs/tongues).  The simile of “tongues extended to the host like waves” extended to illustrate the communicants “lapping back to rejoin the sea” is an apt description of the forward movement of parishioners as dozens or hundreds of individuals approach the altar and then return to their pews.

This passage also illustrates Czaia’s facility with the line. The opening line of this section introduces the paradox of the gospel affiliated with death, but then in the second line, Czaia uses the caesura not only for rhythmic effect but also to enrich the meaning of the line, augmenting the meaning of the sentence: “teeming with its interest for life. The blood.” According to the sentence, it is the gospel that is “teeming with its interest for life,” but according to the line, it is the blood that teems. Linked together, the line and the sentence attest that both interpretations are true. Such attention to the relationships between form and content is what I most appreciate in poetry, the potential of craft to magnify meaning.

The most memorable poem in the collection, though, is “Benque, 2005,” a five-page prose poem that therefore relinquishes the opportunities line breaks create. Although this poem circulates around a narrative, the speaker’s experience as a young man teaching in a Central American village, its tone is contemplative. Despite its length and the implicit narrative, “Benque, 2005” is not a narrative poem so much as a reflection on meaning. The poem refers to young love, adolescent misbehavior, religious emotionalism, and the rape of a boy by his uncle. But it is not about any of these things; it is about a man’s coming to terms with the fact that his world contains all of these things—play and tragedy, love and evil. The final paragraph accepts these facts, but it also asserts that life consists of more than these facts:

Some day I will be dead, as dead as any martyr or heretic, as dead as any willful human bereft of will, memory and desire. And then Benque will only be dust in my mouth, dust with other dust, mixing and mingling beneath my skull. And I will wait as others wait in the valley, to be remade, to dance in my fitful way with the other resurrected bodies. I will wait to be clothed again with flesh.

Saint Paul Lives Here (in Minnesota) is a memorable collection written by a poet with something to say. I look forward to reading more of Zach Czaia’s work.