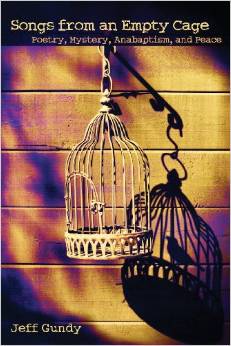 I am not the ideal audience for Jeff Gundy’s Songs from an Empty Cage: Poetry, Mystery, Anabaptism, and Peace, though I think I come close. I am a poet, after all, with a particular interest in the links between spirituality and creativity, and one who finds the transcendent and immanent equally compelling. But I am not a member of an Anabaptist tradition despite my attraction to some of the impulses behind the historic peace churches. So reading this book as someone who is a near bystander but not a member of Gundy’s community was a provocative and satisfying yet also odd experience. I noticed my readerly identity more than I often do while reading, and I recognized my outsider status, but I was an outsider this time because I am not in the minority, as Amish, Mennonites, and members of the Church of the Brethren almost always are—that was the odd part.

Songs from an Empty Cage consists of sixteen essays that engage the intersections of the four terms in the book’s subtitle. One of Gundy’s goals is to participate in a style of divine exploration that has recently come to be known as theopoetics. Theopoetics isn’t just eloquently written theology or poetry that functions as theology, but a different approach, a more imaginative stance, within theology. It is a theology of the mystics. It aims to infuse theology—which often strives for finitude and certainty and closure—with a poet’s approach to the world, an appreciation of mystery and longing and openness. Theopoetics, in other words, might be less concerned with doctrine as a source of truth than with metaphor and image as a means of exploring possibility.

Some of these essays are directed specifically toward Anabaptists, especially Mennonites, and assume some familiarity with Anabaptist history (the significance of the Martyr’s Mirror, radical violence in 16th century Münster) and contemporary political and theological questions (in the work of theologian John Howard Yoder for example). These essays both puzzled and intrigued me. Gundy provides enough context for those of us outside his tradition to situate ourselves, but he doesn’t feel compelled to rehearse the entire history of the Protestant Reformation or of Anabaptism’s place within it. As a result, I could follow his arguments, but I also felt a newly kindled curiosity, a desire to learn more.

Many of the essays are structured as interesting hybrids of memoir, intellectual argument, and creative expression. They enact, therefore, Gundy’s attraction to heresy (he confesses, on the first page of his introduction, to a “fascination (mostly intellectual) with transgression, opposition, and ‘heresy’”) by refusing rigid generic boundaries—without drawing unnecessary overt attention to the fact that that is what he’s doing. I don’t mean simply that he includes some poetry within his prose, but more importantly that he crosses the major division that existed in many English departments during the latter part of the twentieth century—that between the creative writers and the analytical writers, the emotive types and the intellectuals—a division that more recently seems to be dwindling, for which I am exceedingly grateful. Because of the structure of these essays, we not only witness a mind thinking, but we’re also privy to some of the intuitive leaps that mind makes.

“’Truth Did Not Come into the World Naked’: Images, Stories, and Intimations,” for example, illustrates Gundy’s struggle with abstraction. It begins with an anecdote—he had been invited to reflect on the contributions of a colleague, J. Denny Weaver, and to address among other topics how his “viewpoint on Christology” related to Weaver’s work. Rather than explain his understanding of Christ directly, comparing or contrasting it with Weaver’s, Gundy recalls a poem, “How the Boy Jesus Resisted Taking Out the Trash.” He includes the poem in this section of his essay, and then goes on to consider how his poem corresponds to the nature or style of some of Jesus’ teaching. Gundy’s response is decidedly elliptical, but then Jesus was also at times an elliptical fellow. In considering theological questions, Gundy returns again and again to the concrete and incarnate. He includes several other brief narratives in this essay, referencing Walt Whitman, Thomas Merton, the apocryphal Gospel of Philip, James Wright, and others with equal ease. The essay concludes with a description of a “poetry night hike,” organized by Gundy, that went awry. He blamed himself, but got a poem out of it anyway, “Where Water Finds an Edge,” which begins with the line “Nothing like a careful, thorough plan with one large error.” The speaker of the poem searches for a place to sit beside the river, and then the poem continues:

The essay ends one paragraph later, with a reflection on the gift of error, the value of stumbling through the dark. Both the poem and the essay demonstrate the style, substance, and value of theopoetics. Rather than endlessly searching after certainty, we might become like the water, forgiving ourselves for our own clumsiness on our own “breathless journey,” leaping forward even “as the full night arrives.” Gundy never does directly address the instruction he began with, to provide some description or definition of his Christology. Nevertheless, by concluding the essay with this poem, he suggests that theology, too, needs its own darkness, its own glowing ledges. Precisely by living fully as incarnated beings in this world, he seems to say, we inhabit the mind of God.

Many of the essays in this collection reward close readings. Like the best theology and the best poetry, they open out onto the world.

Beginning to waltz or participating in other activities, monks show up frequently in George Looney’s sixth collection of poetry. So do artists, particularly Caravaggio, and violins and hearts and various species of birds—vultures, crows, parakeets, loons, and that other Bird, Charlie Parker and those other flying creatures, angels. What this suggests is that Looney is comfortable drawing from classical culture as well as nature for his imagery, metaphors, and motifs. Despite this range, the poems individually and collectively explore one dominant theme—the spiritual longing that works through and yet somehow transcends mortal flesh. Hence Caravaggio, that painter of fleshly abundance. Hence the birds, those beautiful fluttering creatures who are here and then gone, who embody our desire to rise above the very flesh that weights us to this life.

The opening poem of Monks Beginning to Waltz, “The Sorrow and the Grace of Vultures,” exemplifies this theme, and it is a particularly successful example of Looney’s craft. It is also my favorite. Through deft line breaks and carefully placed pronouns, the poem exploits ambiguity, not to confuse but to engage a reader’s conscious attention with the scene at hand. Most of us don’t ordinarily associate vultures with grace, either its physical or the spiritual form; yet the poem begins with the speaker’s father asserting that connection: “My father says they prove grace is possible / even in this world, // that memories only need the occasional / slow drag of wings to stay aloft.” This metaphor is accurate, I think—memories do stay with us without much effort, or reappear suddenly as if brought back with the breeze. But why would grace be affiliated specifically with buzzards, rather than with some more delicate or more majestic or simply more beautiful bird? The speaker interrupts to insert what seem to be his own metaphors: “They drift / thermals off flat tar, dark angels // some Italian might paint. I’ve seen them pray / over a deer with a second skin of flies, // an altar panel Tiepolo would not have / placed behind the cross.” Are dark angels necessarily demons? When buzzards pray, do they praise death? Is this poem going to become simply macabre, or is its author up to something else? I found myself both fascinated and repulsed by this imagery, yet also intrigued by a speaker who could imagine grace enveloping even a buzzard.

The poem contains an embedded story that reveals the relationship between grace and buzzards, a story in which buzzards become like angels, messengers of God if, as the speaker’s father wonders, God is who we’re praying to when we pray. A soldier during World War II, the father had found himself hiding out in an Italian church, along with several other soldiers, some wounded. “A local told him // Tiepolo painted the frescoes that flickered / around them. Explosions // brought the stained glass to life. / In the tortured light of saints // they cowered in the rafters.” They? By this point, readers have likely forgotten the buzzards, or momentarily set them aside, but within a few lines, we’re reminded that these birds led us into the poem, and now they’ll lead us through the story. “Could’ve been / the end of the world for all // they knew, he says. The wounded were / so afraid my father and a friend // opened fire. The first hit hung there, / claws stuck in wood. // It fell later, in the silence after / the shelling. They had to // shoot the rest out of the air. It was / awful, he says. Trapped // by the amnesia of panic, they flapped / from stained glass to wood, // looking for the rip artillery had left in the roof / where they had come in. // One finally broke through the flickering image / of Saint Francis and died. // Two escaped through the shattered monk.” Within seventeen lines, Looney has used the pronoun “they” five times. On each occasion, the referent of “they” is certain or nearly certain, yet readers understand that lingering beneath the buzzards’ panic is the panic of the soldiers, and the end of the world could be near for all involved. Looney’s choice to rely on a pronoun rather than on a series of nouns, in other words, contributes to the poem’s depth and complexity; seldom is a poem’s success so dependent on “they.” As the poem moves toward its conclusion, the layers of meaning depend less on grammar than on the connotations of icons. The image of St. Francis, patron of animals, leads not to freedom but to death, at least until the saint himself becomes “shattered.” These two buzzards who live through the ordeal to escape become “angels who flew / through Francis into a sky, // broken, with room for grace.” The father believes in this grace because he believes in forgiveness—for the multitude of sins implicit in this story, many of them almost unavoidable for the individual soldier.

If I would ask anything else of this book, it would be for greater stylistic variety. (With one exception, all of the poems are written in couplets or in a combination of couplets and tercets.) Yet the book’s consistency also contributes to its virtues, the consistency increasing the pressure, with each poem, to make it new. Looney does that by taking the old questions seriously, by insisting on meaning even in this modern devastated world.