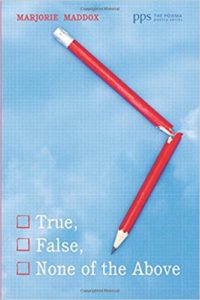 The poems in Marjorie Maddox’s True, False, None of the Above are amusingly erudite. Nearly all of them allude to other pieces of literature and other writers, from Dante to Hawthorne to Hopkins to Flannery O’Connor. While they take life seriously, they don’t take themselves too seriously, and they accept the foibles that so often characterize human beings.

Much of the sense in these poems emerges from their epigraphs, as in “Euchre and Eucharist,” which cites Robert Frost speaking of T.S. Eliot, “I like to play euchre. He likes to play Eucharist.” The poem proceeds as a series of—references, more than misquotations, revisions, playful paraphrases of both Frost and Eliot. “Something there is that doesn’t love a game,” it begins, “that wants its end.” Later, the poem responds differently to games: “Hope is the cruelest game, breeding / lies out of the dead hand, mixing / memory and desire.” Maddox refers to multiple Frost and Eliot poems, revealing deep understanding not only of both poets’ oeuvres, but also of their different philosophical commitments. Yet as fun as “Euchre and Eucharist” is to read, it transcends any temptation to become simply a spoof. Religion is an easy target, and many writers have taken their aim; if all a poem does is demonstrate how easily religion can be satirized, it also demonstrates a lack of ambition for itself. Frost in the epigraph suggests that Eliot at least, if not all Christians, approaches a central tenet of his faith falsely, as an impersonation of the real thing, if the real thing exists. Rather than rise to that bait, Maddox plays with the most well-known lines of both, forcing readers to ask how serious play can be, or how playful serious questions can become without losing their urgency. “In this garden of numbers / that promise redemption, / picking apples is a distraction” another stanza asserts. Here Maddox is doubly allusive, referring not only to Frost’s “After Apple-Picking” but also to the story of the Fall in Genesis. One reading of the line is that the poem critiques Frost, even as Frost critiques Eliot, for his poem, his dream of apples, of an abundant harvest, his long sleep. Is picking apples a distraction? Or is it a distraction only when the player is already distracted by play? Is the harvest a component of redemption, or does it create the need for redemption? Such fruitful (no pun intended, really) ambiguity reveals the depth of this poem and the true seriousness of its game.

Maddox frequently captures the essence of human weakness, often more unfortunate that overtly malicious. “Mañana” responds to Hawthorne’s “Young Goodman Brown,” a story of temptation and delayed promises of repentance. The poem illustrates how easily we persuade ourselves of our good intentions, even as we surrender to temptation:

“Mañana,” we call over our shoulders
to our other selves on the brink of the forest,
the ones testing the shadows with a toe,
calculating the time and temperature of predicted
repentance. “Mañana,” we hang on the breeze
drifting toward the dark leaves that decay
beneath our dust-clad feet traveling nowhere
but away…

This poem succeeds in part due to its imagery but even more, I think, due to its rhythm and other sonic effects. The proportion of monosyllabic words in this excerpt is high, permitting a steady beat, and the longer words often reproduce sounds from the shorter ones. Notice the alliteration—“testing,” “toe,” “time,” “temperature” and “drifting,” “dark,” “decay,” “dust.” Notice the off-rhyme of “breeze” and “leaves” and the internal rhyme of “decay” and “away.” Notice the assonance—“over,” “shoulder,” “toe.”

The most immediately noticeable detail of the poem, though, is its title, “Mañana,” which is repeated five times within the poem itself. Why the Spanish, we might ask, especially since the poem responds to an author who could not be more strongly identified with New England. Why not simply say, “tomorrow”? Although “mañana” means “tomorrow,” it also means more than “tomorrow.” It means “not today,” which might be tomorrow or might be someday, maybe. The connotations of “mañana” don’t include a definite commitment but rather an indefinite non-committal. The speaker, and all of us who intend to get around to repentance someday approach the idea casually. The task isn’t urgent. The last lines, though, suggest that such an attitude is precisely our undoing:

…just as the last lights sink
and—from the thick woods of our denial—
the serpents uncoil.

Readers shudder at the image, its suggestion accentuated by the off-rhyme of “denial” and “uncoil.”

The poems in True, False, None of the Above share a consistent approach in their allusiveness, but the collection also highlights stylistic variety. It includes poems that rely on rhyme and meter as well as free verse; poems written in couplets, tercets, and quatrains; poems divided into sections and poems composed without stanza breaks; poems reliant on short lines and long lines. The shortest poem here is seven lines, the longest over a page. Through her ability to exploit form, Maddox adapts form to content. Because of this variety, the book avoids predictability, even as so many of the poems cite their ancestors.

Taking tradition seriously, the book also recognizes how relationships between writing of the past and present create a living text.