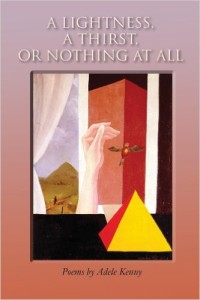 As a form, prose poems often puzzle me. For a long time I resisted them, for they relinquish the one element that permits poetry to exploit language as prose cannot: the line. Relationships between lines and sentences affect rhythm and create layers of meaning to augment the meanings of sentences alone. Line breaks can disturb or reinforce tone and mood; they can lull or jar the reader’s response. So why would a poet choose to relinquish all those possibilities?

Yet I have read several collections of prose poems lately, generally written by poets who have published lineated verse in the past, including Adele Kenny’s moving A Lightness, a Thirst, or Nothing at All. Reading this collection, I finally realized what may have always been obvious to others: the most important characteristic of prose poems isn’t their abandonment of the line; it’s their exploration of what else a poem can do. Relying on the paragraph rather than the stanza forces poets to foreground figurative language or sonic devices to distinguish their writing from more unequivocal prose.

These poems are meditative, and they rely on the image to guide us through the speaker’s thoughts. Throughout the collection, Kenny relies on images of light and rain, as well as other components of the natural world, both wild and domesticated. Among the collection’s prominent motifs is grief, and in the opening poem, Kenny considers her natural environment to explore her experience of loss. Here are the first sentences:

Even if the asters were permanent, the last crickets under the pine still fully alive, fully present—the balance not so easily tipped. Even had she kept what she couldn’t, it was always this: what stayed broken—literal dust and the way light thinned.

As an opening, this paragraph is both hospitable and mysterious. Because its references are so concrete—asters, crickets, dust—readers feel (perhaps deceptively) stable. Yet there’s still so much we don’t know. What couldn’t “she” keep? What won’t be repaired? Although we may presume the poem is set in autumn, we’re uncertain about where exactly we are, or even if place is important. Given the vocabulary—“permanent,” “alive,” “dust”—we suspect that the poem may be leading to death, but doesn’t everything lead there? Here are the remaining two paragraphs. Notice how Kenny follows the image to her insight:

She thinks of the house in the mountains, how rain settled for days in the hollow between two hills—without thunder, without stopping—the way rain sounded then, the field’s dim glistening. She remembers how wet earth pushed its cold up, the creek overfilled, fast over fallen leaves, the leaves singing—how it feels (that wanting to go home)—the mortal act of are and are not. That simple, that clear.

Now it’s about what lasts, the way nothing ends without pouring itself out—chrysanthemums shattered by rain, light that lingers in lessening light—what she means when she says my life is not this or that she is not really here.

Because of the compelling imagery early in the paragraph (especially, I think, the uniquely accurate “how wet earth pushed its cold up”), readers will accept Kenny’s direct expression of her core concern: “the mortal act of are and are not.” For that is what mortality is, a recognition of the difference between “are” and “are not.” But the poem doesn’t end there. As we reach its conclusion, we realize that its topic is not death, exactly; it’s life, that part of life that merges into death through a climactic display of one’s essence: “nothing ends without pouring itself out.” We see the deeply colored autumnal chrysanthemums, as we consider what becomes of light, ours and the world’s. Kenny’s observation here is apt; rather than interpret light as the simple opposite of darkness, she recognizes its continuity, how it remains even as it gradually disappears: “light that lingers in lessening light.” Because of how attractive and thought-provoking this imagery is, readers, too, want to linger, mulling over the last clause, “that she is not really here.” Is she not here, as the light is not fully here (though it is, still, here)? Does she now understand what she means when she claims not to be here? The poem has already suggested that even as she pours herself out, she lasts. She is here, and she is not here, just as everything that has ever been, all that she remembers, has disappeared and also remains.

This is what I mean when I say these poems are meditative. Kenny can describe an experience without, as Keats phrases it, “any irritable reaching after fact and reason.” This quality persists throughout A Lightness, a Thirst, or Nothing at All. In “What Calls You,” one of my favorite poems in the collection, the speaker explores the nature of her own spiritual calling. Like many of us, she once thought a true call would arrive like the bolt that struck St. Paul off his horse. And as it does for many of us, that experience evaded her. This poem is structured similarly to “What She Means,” in three paragraphs, with the first presenting her dilemma, the second exploring it through concrete imagery, and the third conveying an insight acquired through close attention to the world. “Back then,” the poem begins, continuing:

I wasn’t sure what calling meant. I thought something mystical—God’s hand on my arm, a divine voice speaking my name. Instead, I discovered the colors of cyclamen, how even the meanest weeds burst into bloom.

It ends this way:

Whatever idea I had of myself turns on this: what lives on breath is spirit. I discover the power of simple places—silence—the desire to become nothing.

What she discovers is mystical, even if it is not abrupt or disruptive or extraordinary, as “a divine voice speaking [her] name” would have been. It is “the desire to become nothing” that permits the ability to pour oneself out, as “What She Means” describes a similar experience.

My memory lingers on these poems as I move through my day. Perhaps that is the best we can say about a poem, or any piece of art.