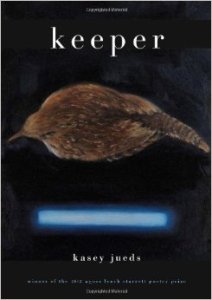 Winner of the Agnes Lynch Starrett Poetry Prize, Kasey Jueds’ Keeper is filled with poems that have stuck with me, and only now am I fully understanding why. Most of the poems are image-driven lyrics, but the speaker’s presence is often muted, even when she enters the poem as “I” or, less often, “you.” The poems are thoughtful, as if the material continues to turn in the speaker’s mind, as if meaning emerges like light tilting against a holograph. Although each image blends logically into the next, we often end up quite far from where we began. This is how poetry ought to work, through reliance on the concrete, the work of comprehension transpiring in the reader’s mind, the poet providing all that is necessary and nothing that is not necessary for comprehension.

The opening poem in the collection, “Bats,” serves as prologue and illustrates how the poem develops through associative links among its images. The first and second stanzas describe that recognizable yet confusing experience—waking to the soft motion of swooping bats. Then the poem shifts toward the mystical, challenging us (or at least those of us, like me, whose dread of bats is nearly unspeakable) to perceive these creatures differently:

First dark, then more dark
smoothed down over it.

First sleep, then eyes
open to the ceiling
where something circles. For a moment,
you can’t name it. And for a moment

Blake’s angels, how they leaned
toward each other, and balanced
by touching only the tips of their wings?
Between their bodies, a space

like the one just after rain begins, when rain
isn’t rain, but the smell
of dust lifted, something silent and clean.

The syntactic repetition in the first two stanzas is inviting, even comforting. “First dark, then” leads to “First sleep, then”—though the second occurrence becomes eventually startling. We can recall a bat’s distinct darkness against night’s darkness, and against the darkness of sleep. And we can recall the moment between noticing and naming. Here is where Jueds’ skill with lineation is most evident: For a moment, / you can’t name it. And for a moment // you’re not afraid. Remember…” The lines break at “moment,” extending that moment for the reader. Line seven serves as the fulcrum upon which the poem balances, a single-line stanza that reads as a reminder to be not afraid. But “Remember,” of course, carries the poem over its turn, the speaker describing Blake’s angels so that we seem to remember them even if we’ve never seen them. The angels balance themselves somehow because they hover above empty space—or space that is filled with meaning rather than with material structures. A thing becomes itself through time apparently, for during the immediately preceding moment, “rain / isn’t rain.” Rain is what will be, and space is filled with understanding of what will be. Jueds describes rain plausibly as “something silent and clean,” and if we’ve been reading attentively and receptively, we’re now willing to consider the bats as angels balanced on the tips of their wings, as things “silent and clean.” We might resist such an suggestion almost reflexively, until we remember the poem’s central caution: “you’re not afraid. Remember.” I appreciate the suggestiveness of this poem, not so much in its identification of bats with angels, for that identification relies on the clear logic of analogy, but with the next leap, the association of these flying fearsome creatures with the cleansing precision of rain.

A poem I particularly like is “Stratus clouds form” which opens the second section of the collection. The title leads into the first sentence, which is itself unusual in its syntax. The first part of the sentence consists of three clauses, one subordinate, all balanced on that most common of coordinating conjunctions, “and.” But the clauses on either side of the “and” are not balanced in their meaning as we might expect; that is, the meaning of the sentence veers toward a new direction at the “and.” “And” often signals only accumulation, so readers relax their attention. Here, we’re surprised at the shift, and we’re surprised in part because the syntax minimizes any expectation of surprise. Here is the poem:

when a layer of air is cooled
to the saturation point, and today
I want to call it kindness:
like lilacs permitting us their scent
just sometimes, off to one side
of the entire, rain-shined bush,
mountains keep to themselves
behind gray, thinking we can’t hold
all of this at once. In Siena
I saw a leafless tree, covered
in oranges, and St. Catherine’s head
preserved behind glass in the church,
as if too much wholeness
could be too much. Then last winter I forgot
about daffodils, and felt so surprised
when they returned, yellow all the way through
like a ball of wool that, even behind
a closet door, contains the baby’s blanket
wholly in its globe, and waits
for our hands to begin.

The poem begins factually, and the fact is interesting in itself, but the poem then shifts to the undeniably subjective: “I want to call it kindness.” The poem moves through several figurative turns, including some startling visual images. The “leafless tree, covered in oranges” startles us with brilliant color, and then the head of St. Catherine startles us differently—after these references to nature, we aren’t expecting the macabre. But Jueds doesn’t include this detail as a gratuitous shock; it, too, illustrates the “kindness” the universe extends to human beings. We are limited creatures, intellectually and emotionally as well as physically. Yet the kindness the universe extends also implies fulfillment: water vapor contains the cloud even before the air is cooled; the head suggests the body even when severed from it; and finally, the ball of yarn contains the blanket the hands will knit. Most crucial to this final image, of course, is the requirement of human participation.

Having read this book, I find myself thinking differently. These are poems of quiet revelation. They show me a mind thinking, in images and through metaphor, turning an idea over and then over again. Reading Jueds’ work feels like walking around a large scuplture, noticing how it seems to move of its own accord, responding to our angle of vision. I won’t say I’m looking forward to her next book, not yet, because Keeper provides me with enough to mull over until that next book arrives.

Regular readers of this blog will note that Kacey Jueds has contributed a couple of guest reviews. In the interest of full disclosure, I want to state that my relationship with her is limited to correspondence regarding those reviews. 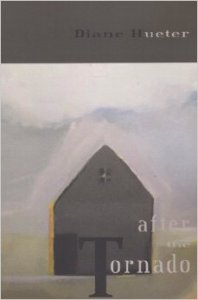 After the Tornado by Diane Hueter is the most character driven collection of poetry I’ve read in quite some time. Individually, the poems are (apparently) autobiographical lyrics exploring family and landscape—and the effect of landscape on family. Some members of the family appear in poem after poem, however, so the cumulative effect is—not exactly a story—but a presentation of atmosphere that suggests story. While the collection itself illustrates a narrative impulse, the individual poems vary sufficiently in style to keep the reader engaged and even occasionally surprised.

In “Digging Clams at Sequim Bay,” the speaker visits her childhood coastal home, recalling both the childhood and the occasions she took her own children to visit. But her memory is imprecise; she remembers her longing more intensely than she remembers the individuals who accompanied her:

Did I stand there with Josie
Balanced on my hip?
Or was it Erin, years later?
Someone whimpered over the cold
The sand
The wind

I watched the houses across the iron bay
To see if anyone came out
Paused at the shore
Or got in a boat to chug away.
No one did.

Through the light fog
The houses, red and white toys,
Lay scattered along the bank.
I waited for the fisherman
Or his wife
To stand waving from the headland
A miniature lighthouse
A beacon to the farther shore.

This center section of the poem is disconcerting not simply because the speaker can’t remember which child she held at the moment of this memory, but also because the speaker herself seems so alone in a desolate landscape. In another context, the “light fog” could become almost romantic, as slightly out-of-focus photographs can seem romanticized, but here, in the cold at the “iron bay,” the fog serves only to separate, to conceal. No one emerges from the houses; no one offers acknowledgment; no one serves as guide. Within the next several stanzas, the speaker recalls generalized experiences, those that occurred over and over again through each summer, until they seem like one extended memory. Finally, in the last stanza, she decides, “It must have been the summer we felt / Death hovering in the fog.” But even this understanding does not clarify her earlier confusion. The poem ends with this question: “Which damn child whispers into the sleeve of my coat / I’m cold, I’m cold, I’m cold?” The intensity of the emotion—“Which damn child”—suggests that the speaker is unusually invested in this memory. Readers, of course, understand that the cold whispering child may be neither Josie nor Erin, but the speaker herself waiting yet, her own childhood superimposed upon her children’s, comfortless still.

A poem with a similar but more ominous mood occurs close to the end of the collection. In “Icicles” a character identified only as “she” receives a phone call from her father announcing that a third character, “you,” has died. Similarly to “Digging Clams at Sequim Bay,” “Icicles” opens in darkness, cold, and isolation: “She stood in the chilled and darkened room / because the only telephone was in a room / shut off each year against the cold.” The woman listens to her father deliver his news, unsurprised at its content though startled by her own eventual reaction:

But it was the season they lost the pup to coyotes,
and the neighbor’s dog slaughtered all their chickens
when they were at work.
The winter they marveled at water spilled from a jug.
The time it froze as it hit the cooking pot—
then froze in the jug, too.

So it was winter when she learned of your death.

Images follow, of winter details, of ice—both so beautiful and so dangerous. Her father wouldn’t understand that for some people, including his daughter, this death might be good news. “You” is not someone she plans to mourn. The poem itself doesn’t reveal why the woman responds as she does, only that

for a moment, she was ready suddenly to say
as if it poured from her like water—

But she stopped,
because it hurt so much she couldn’t see.

“Icicles” is one of the few poems in the collection not narrated in the first person, though it’s reasonable to assume a relationship between the “she” in this poem and the “I” in many of the others. Read in the context of the entire collection, “Icicles” gains meaning, similarly to how individual stories within collections of linked short stories acquire significance through their context. I won’t reveal here the interpretation other poems in After the Tornado suggest; instead, I will only compliment Hueter on her restraint. The poem is as effective as it is because readers can sense the effort at self-control the news demands of the woman.

At first glance, After the Tornado seems to be about the hardships of life on an unforgiving land. It seems to be about natural disaster. And it is about these things. More significantly though, the poems address personal disaster, as Hueter takes up the task of describing—through figurative language because literal language is insufficient—the effects of such disasters.