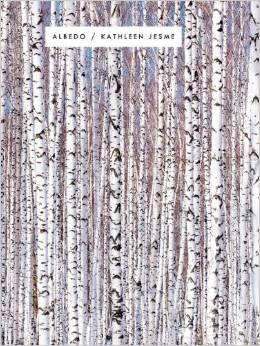 I have been a fan of Kathleen Jesme’s work since I stumbled across her Motherhouse a few years ago. Her style is unique—spare and elliptical yet also direct and inviting. Her poems suggest that there’s more below the surface, that if we sit patiently, even meditatively with them, deeper meanings and fuller pleasures will reveal themselves. Albedo, her newest collection, has already received a widespread positive response (it’s currently a finalist for a Minnesota Book Award), but I would like to look at it here also, to mull over some of her strategies, to think about why her poems appeal to me so much.

Albedo is divided into three sections, with the first, “Albedo,” consisting of two long multi-part poems and the others, “Ordinary Work” and “Coastline,” composed of many more generally shorter poems. Throughout the collection, Jesme exploits the white space of the page as effectively as she chooses her imagery, figurative language, and form. It’s almost as if, especially given the collection’s attention to light and darkness, the whiteness itself becomes an image.

The title of this collection is risky simply because “albedo” is a word few of us will know (ok, maybe your vocabulary is more comprehensive than mine), but its meaning is perfect for the collection. I would have picked up this book regardless of its title because I want to follow Jesme’s work as long as she keeps writing, and I would also have been drawn to its beautiful cover image, a photograph of the trunks of hundreds of birch trees, reinforcing the prevailing imagery of light and darkness in the book. I hope readers new to Jesme’s work will be intrigued enough by the title and cover to pick it up. Here is a link to Jesme reading three of the poems.

“Albedo” is a technical term in both meteorology and astronomy and relates to the ratio of light reflected, say by the earth’s surface, to that received. The word appears in a section of the long poem “The Mythology We Have Now”:

Although these sentences explain a concept, what lasts for the reader is the image, the darkness of the pine’s green shading to near black set against the “scattering of sunlight.” This poem, “The Mythology We Have Now” is an extended elegy for the speaker’s father. It’s an experiment in language, an attempt to discover how we can connect, through language or through other elements we describe with language, to those who exist now only in our memories. Here is the section from which the title comes:

in a trillionth
of a second

light is the fossil
of that great scattering of matter and dark energy:
how like us our little universe—

but I have discovered
my love of shadows:

things visible only in the absent
part of sun

Many part of this section are intriguing—the understanding of physics and astronomy as mythological systems, the metaphor of light as a fossil followed by the simile comparing human beings to “our little universe.” Because of the strength of its imagery and the turn it takes in the penultimate stanza, this section could stand alone as an independent poem, but it becomes geometrically more resonant in its context within the longer poem. The section that precedes it relies on language and imagery similar to the “lowest albedo” section I quoted above, but it also incorporates a direct description of the deceased father’s communication:

The imagery in this section works thematically to connect sections that precede and follow it. The direct meaning of a given section deepens through content revealed in other sections but related imagistically from one section to the next. “I have discovered / my love of shadows” is more resonant because it follows “the way the light / is drawn // in such a dark place / and to my own absorption in it.” Yet the language remains mysterious, or maybe mystical—it’s not as if one section of the poem simply explains another section. Instead, we follow the speaker experiencing loss but not complete loss, attempting to understand the nature of this life that is both finite and infinite, just as the universe seems to be.

Albedo is the type of collection that presents an unfair challenge to a reviewer, for it’s extraordinarily difficult to excerpt lines or stanzas; though short passages may illustrate Jesme’s tone or style, they don’t adequately convey the effect of the book. The only adequate review of this book would be a complete reproduction of it. Instead of reading such a reproduction, readers will be much more gratified if they pick up the real thing. As poetry goes, Albedo is the real thing.