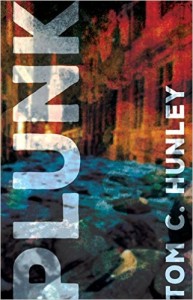 Plunk is one of those refreshing books that delivers on its promises. Its title is certainly colloquial, its “blurbs” are entertaining ironic anti-blurbs, and its table of contents lists such entries as “What If There Lives, Within You, a Man Who Loves Random Consolations?” “Self-Portrait as a Child’s Stick Figure Drawing on a Refrigerator,” and “While We Were on Fire, Our Shadows Glided on Water.” The whole collection—and Tom C. Hunley has written several—is ironic and loquacious and wily. Although many of the poems are written in free verse, several pay homage to received forms—though those forms aren’t always received from poetic tradition. They include, for example, not only villanelles and an ode but also multiple choice questions and questionnaires. The poems in Plunk are energetic and energizing, and, basically, fun to read and to read aloud.

Several of the poems illustrate an “ultra-talk” style—manic, associative, expansive, yet somehow consolidating the multifarious references by the conclusion. “Permanent,” for instance, discusses tattoos, marriage, gangs, coffee shops, cable tv networks, and other topics. It opens with an odd piece of dialogue: “Hey, your tattoo fell off,” odd because even temporary tattoos don’t “fall off.” Immediately, therefore, readers begin to question the idea of permanence. Eventually, the speaker himself rambles toward an acknowledgment of his strategy:

Hey, your tattoo fell off, I said, and picked it up,
but she thought I was trying to pick her up,
so she rushed away, her legs long and tan except
for a balloon-shaped vacancy on her ankle where
the tattoo had rented space. She was beautiful with
curly hair and probably men had been hitting on her
for as long as she could remember, and maybe she
assumed that fending off their attentions would be
a permanent part of her life. Listen, my parents died
last year. They were always there, hovering,
when I was small. First the air went out
of their marriage, and then Pop was gone, and after that,
Mom was gone, and a little while after that, I made up
that preposterous story about the woman whose tattoo
fell off, I guess to illustrate something about impermanence.

It may seem as if we’re merely encountering a speaker who can neither stop speaking—for this quoted section comprises about one-third of the poem—nor very easily get to the point. It may seem as if whatever the writer thought of made its way arbitrarily into the poem. If we follow the leaps more closely, however, we can notice a pattern in the language. The woman’s tattoo isn’t just any inked image; it’s a “balloon-shaped vacancy.” Then the marriage of the speaker’s parents didn’t simply fail—“the air went out of” it, as if it too were some sort of balloon. And the speaker doesn’t refer to his father with the more common “Dad” but as “Pop,” evoking the sound most closely associated with a balloon. By the time the speaker draws overt attention to the poem’s conceit, we’re beginning to understand his concern for permanence, a concern that has very little to do with tattoos.

After a short discussion of gangs and coffee and Mt. Rainier, he returns to family and marriage, those institutions we most identify with permanence, despite all of our evidence that ought to undermine such assumptions:

I shouldn’t have made that up about my parents dying
or about the gangs trafficking in coffee. I wanted,
I guess, to show you something about impermanence.
I wanted, ironically, to make a lasting impression
on the subject. I should have just led with the fact
that the old Rainier Brewery is now the headquarters
for Tully’s Coffee. If a landmark like that can’t last,
maybe no one’s marriage has a chance; maybe all of us
should tattoo tears beneath our eyes or fill our hearts
with helium and reckless love and let them fly
untethered and brightly-colored across the sky.

Most of us have experienced that peculiar shock when a restaurant or department store we’ve known all our lives closes. We feel a little destabilized, a little, yes, untethered. Maybe nothing is permanent, including those things we hold most dear. Maybe that means we ought to insist on a different permanence, the grief symbolized by a tattooed tear—until we recall that the poem opens with a suggestion that even tattoos fall off. Here, the speaker returns again to that image we’d likely forgotten, the balloon shape of the first tattoo, but the image is transformed in these last lines, into an image of spontaneity and joy. The point of life isn’t permanence after all, it seems, but release. That’s not a new idea, but Hunley has created a new way of saying it.

The chatty style prominent in these poems, together with their pop culture references, can mislead us into assuming they are simply slight observations of mundane details, that they have little significant to say. Such an assumption would be a mistake and would do not only the poem but also the reader a disservice.

Most of my favorite poems in Plunk, including “Elegy / Litany,” “Eight Bits Usually Equals One Byte,” and “Prelude to Pillow Talk,” adopt the style and strategies of “Permanence.” Toward the end of the collection, a few poems combine Hunley’s colloquial language with received forms; this juxtaposition of elevated form with idiomatic diction works particularly well in the two villanelles. On occasion Hunley’s ironic commentary on form reads more like an exercise than an actual poem, in “A Little Less Beauty” for instance, which gestures toward the blues poem but doesn’t quite pull it off, primarily because of the too-predictable rhyme. So, do I wish Hunley had omitted one or two of the poems here? Yes. Do I think their inclusion is a fatal flaw? Not at all. For just as the truest poems are always risking sentimentality, to paraphrase Hugo, the most inventive poems perhaps also always risk falling flat. This caveat aside, Plunk is an enjoyable collection, of its time without being limited to its time.