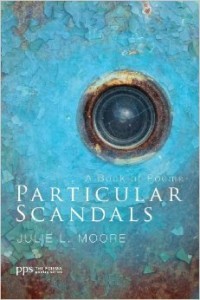 Particular Scandals, Julie L. Moore’s second full-length collection, is a book about faith and trust, family and nature, the glory and horror of each of those things. The speaker’s faith here is informed and open-eyed and subject to interrogation. The speaker celebrates her family members but also acknowledges loss. Creatures and plants enter the poems as they often do our lives, evoking our awe but also warning us away. Addressing these topics, a less capable or less honest poet would have defaulted to the romantic or perhaps surrendered to rage; Moore chooses instead to stand her ground, turning away from neither beauty nor pain.

From this perspective, the two most thematically significant poems are the opening one, “Amen and Amen,” and the ten-part title poem, “Particular Scandals.” In “Amen and Amen,” the speaker sits outside as night descends, listening to her daughter “playing the piano, / singing Cohen’s Hallelujah, / her voice rising, the keys / stirring sparrows in pine trees and maples.” This particular song, of course, stirs many listeners—and the temptation for the writer could be to hope the evocative force of Cohen’s art would carry the emotional weight of the poem. But in the next stanza, Moore veers away from, even undercuts, “Hallelujah”: “but I’m reading O’Connor, considering displaced / persons, the ungodly ways we ruin one another.” The poem then lists several ways contemporary American social forces have “ruin[ed] one another” before shifting focus to monarch butterflies and their poisonous defenses. Here she again briefly evokes Cohen: “how terrible they taste. Hallelujah.” Then the speaker turns to her own physical pain before returning, finally, a dozen stanzas after introducing her daughter’s music, to that haunting song: “Ashley sings on, as though her breath’s / no longer her own, absorbed now / in benediction. Our amen un- // broken, like a world without end.” Moore isn’t simply rehearsing or commenting on Cohen—she has expanded the effect of the song by applying it to a new, unanticipated context. The concluding lines of the poem are particularly effective. I am usually not a fan of hyphenating words at line breaks because so often the motive is simple linguistic cleverness. Here, though, the last line acquires an entirely new, and challenging, meaning: “broken, like a world without end.” The world continues because it is broken, even if the “amen” itself is unbroken.

“Particular Scandals” is the most formally complex and inventive poem in the collection. The opening section consists of descriptions of multiple human tragedies, the sort that encourage us to question either God’s goodness or God’s power. The speaker turns in that direction, but then questions herself, and the organization of her responses is what I find most interesting about this poem:

Why not disavow God, and say, once
and for all, he does not exist,
or if he does, he is not good?

Think: Tomorrow morning when I rise
with the sun to start another day,

will I notice the particular
drops of dew glistening like stars?

Section five continues with images that appeal to our desire to connect with something divine. But then section six acknowledges that we often fail to notice these aspects of our environment, intent on the smaller details immediately before us. Finally, section ten urges us back toward praise:

design of a newborn’s lungs.
Isn’t it scandalous, I wonder, to praise
nothing
for creating beauty

as particular as these?

Which is worse, to refuse divinity as a response to pain, or to ignore it in the presence of beauty? I admire the presentation of a mind thinking in this poem, and I also admire the disruptive effects of some of the section breaks. Thought staggers in this poem before it comes to its resolution, as our thinking often lurches about before we reach clearness. The central idea of this poem isn’t new—human beings have been cursing and questioning and praising God for millennia—but Moore has made it new through her attention to concrete imagery as well as the rhythm of the poem’s development.

In several of the poems, Moore refers directly to several other writers—Hopkins, Hemingway, Longfellow—but the influence I hear most strongly is Dickinson. Moore relies on aspects of nature to develop her themes in that slightly off-kilter way typical of Dickinson, and in some of the poems, the speaker enters the metaphor in straightforward fashion, also characteristic of Dickinson. These features are particularly evident in several poems in the center and toward the end of the collection, “Royal Candles,” “Hells Angels,” “Chicory.”

Finally, I also want to state that Particular Scandals is thoughtfully constructed as a collection, with the poems often arranged to enhance the meaning of those that surround them. “Christmas Stillborn,” for instance, is followed by “What We Heard on Christmas Day,” such that anticipant waiting becomes ironic even if nevertheless faithful. The next poem is “Wonder,” addressed to the incarnated infant Jesus. Because of the arrangement, we cannot read about the “wonder” of incarnation without recalling the infant who did not breathe in “Christmas Stillborn,” a poem that concludes with lines that look forward to the poems that follow: “We wonder at the grave / of our anticipation.” Individually and collectively, the poems in Particular Scandals reward slow, close reading. 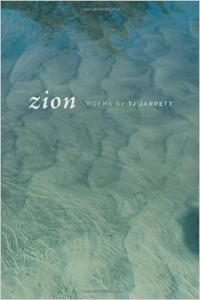 What is it that makes TJ Jarrett’s Zion so compelling, I’ve asked myself in the weeks since I’ve read it. The voice, of course. Yes, but what is it about the voice? The collection consists of a series of poems in which the characters respond to, negotiate, live through, and forgive one another for their American culture of racism, particularly in the early-to-mid 20th century south. A prominent reference throughout the book is Theodore Bilbo, the viciously racist governor of Mississippi and U.S. senator. Given this content, we might expect a jeremiad, since rage is an appropriate response to racism—and I often associate the prophetic mode with a character like Jeremiah or a sermon title like “Sinners in the Hands of an Angry God.” The voice of Zion is prophetic, for it is filled with truth, but it is also restrained, direct, quiet. Its restraint is enhanced by its form; although the collection contains some prose poems and free verse arranged into longer stanzas, most of the poems are written in couplets, the stanzaic choice whose appearance on the page most suggests control.

Although its title might suggest reassurance or healing or redemption, one of the most frightening poems in the collection is “Meridian, MS 1958: My Grandmother Meditates on the Miracles of the Christ.” Here it is in its entirety:

but manageable. The world we knew favored speed
or steel. Or both. We could run when they took up arms or

we could square the body against the pain we each would know.
The world revealed itself in this way, the choice it offered.

Hard then, to pray for more than this. But we did pray. Oh,
how we prayed. We prayed to the river to spare us flood. To the trees

and their turning. To the wind and its lamentation. If you know
nothing of prayer, know this: to pray is to ask—Lord, will we be delivered?

And the Lord said unto us: You ask not for My mercy; go forth
and ask your brethren. And we were sore and right afraid.

In this poem, “the Lord” appears to refuse to intervene in history, to turn the minds of “your brethren” toward repentance or justice. Yet “the Lord” does respond to the speaker with clear if terrifying instructions. This representation of “the Lord” is Biblically consistent, for God is seldom presented there as relieving people of danger—though God does generally accompany Biblical characters through danger. This is how the title begins to make sense, for readers might reasonably ask what “Miracles of the Christ” appear in the poem. Most readers will be aware of the varieties of racial violence the speaker might have witnessed or experienced—“we could square the body against the pain we each would know”—but we also know that change came.

The success of this poem depends in part on the depth of its theme, but it also occurs through Jarrett’s skill with craft. The regularity of the couplets is balanced by the rhythmic variety in the lines. Only half of them are end-stopped, for instance, and most of the lines contain caesuras—sometimes one, sometimes two, sometimes more, a few syllables into the line, or midway through it, or nearly at its break. These caesuras occur because Jarrett exploits her options in sentence length and grammar, layering the line upon the sentence rather than simply reproducing the sentence or other grammatical unit with the line. And the line breaks often reinforce the content, “To the trees / and their turning” for instance, or “The world we knew said no, said wait, said wait. // And the Lord said…” This poem is an excellent example of what a poet can accomplish by considering the effects of a sentence in relationship to the effects of a line.

A secondary motif of this collection has to do with the relationships between figurative language and that other language we believe is literal. In “Miss Polly Experiences the Consequences of Gravity,” the speaker asserts, “To be free of metaphor is a mercy.” Some titles draw insistent attention to language as language—“How a Question Becomes a Lie” and “How the Past Tense Turns a Whole Sentence Dark.” In a prose poem toward the end of the collection, the speaker describes a woman making paper birds out of napkins. Then, “she crossed the room to the hearth and threw a bird into the flames, then another, then another until she had destroyed all she created. Years later when I asked her what she meant, she couldn’t remember. The worst has already happened to us, she said. What good is metaphor now?” In a lengthier analysis, one could evaluate the relationships among the literal, the figurative, and racism. For language is a prominent technology of power—think of the number of nouns created to reinforce racial categories. As readers of poetry, however, we presumably value metaphor, not because it is decorative or because it can divert us from fact or even because it can sometimes be particularly memorable. We value metaphor because it can reveal a kind of truth that more literal language sometimes cannot. Consider, for example, the last lines of the book, from “Theodore Bilbo and I at Last Turn Face to Face”:

…But there is this:
once there was me and there was you

and from my mouth like a shock of doves
comes forgiveness. Believe me,

I am as surprised as anyone.

The simile in these lines, “like a shock of doves,” is part of the reason the speaker’s acknowledgment of forgiveness is persuasive. She opens her mouth and doves burst forth—not magic but miracle. Most of the miracles in the Bible are stories of healing, and that is the story here too.