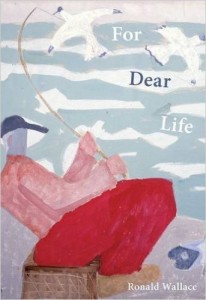 For Dear Life is the most recent collection by Ronald Wallace, a steady poet who has, for the past several decades, published a new collection (as well as books in other genres) every few years. Although he writes most often in received forms, his use of meter and rhyme is subtle (I am tempted to say natural). He responds to the tradition comfortably, with a light hand, adapting it to a contemporary American idiom, expressed in a conversational tone. The effect on the reader is gracious rather than insistent, invitational rather than adamant. Reading these poems, I appreciated Wallace’s reliance on traditional forms, but I didn’t feel battered by the patterns, as occasionally occurs with some neo-formalist poetry. Instead, I admired how his facility with metrical patterns, and variations on metrical patterns, enhanced the poems’ tight language.

The opening poem considers the paradox of paradise—for who among us hasn’t longed for that perfect home, with perfect weather and a life of ease? Ease breeds restlessness though, as this Adam, this Eve, and this God soon discover. At eighteen lines, “Thank God” is not a sonnet, but it is informed by a sonnet’s strategies. Though not strictly iambic, the lines average ten syllables. Wallace abandons end rhyme until the final lines, when he emphasizes closure by rhyming “could” with “good!” Most significantly, the poem turns about two-thirds of the way through, not after line eight as in a sonnet, but after line ten. Until then, the poem consists of a series of judgments on Eden: “Where were / the restaurants, the music halls, the movies? / Where were the children to badger and tax them?” Where, in other words, is variety, or challenge? Uninterrupted continuity mars perfection with monotony. The poem continues with an ironic use of a common expression:

Thank God, Eve thought, for the snake and the tree
that promised such interesting suffering!
Thank God, Adam thought, for Eve
who knew that things couldn’t go on like this,
who could teach him to love pain and loss!
Thank God, God thought, He had left them
to their own best devices, so they could
get out while the getting was good!

The idea that Eden could be understood as perfect only temporarily isn’t new. What’s interesting about this poem is the amusing hyperbole Wallace relies on at the introduction of God, the irony of God saying “Thank God” that the creatures had known better than the creator. In this poem, God is consciously anthropomorphized as a figure who isn’t so omniscient—for God apparently hadn’t realized that perfection wouldn’t remain perfect for long. God experiences surprise and relief, emotions that can be experienced only if one isn’t sure of the future.

The word choice in this passage is interesting, too. Nearly all of the words are monosyllabic, with a few of the lines consisting exclusively of monosyllables, a fact that permits a quick pace—with the exception of “that promised such interesting suffering!” According to the line above, the snake and the tree make this promise, but it’s not only the suffering that’s interesting here; it’s the word choice also, for “promised such interesting suffering” elongates the rhythm and emphasizes the sibilants. The sound of the snake is reproduced here, contrasting with every other line. This line, in challenging the reader’s expectations, demonstrates how variation from a pattern can function effectively, surprising the reader for a purpose.

The most intriguing surprise of this book, though, lies in Wallace’s adaptation of the sonnet. As anyone who has written numerous poems in the same form knows, eventually its challenges dissipate. The writer either tries a new form or tries a new approach to the old form. For Dear Life contains nearly two dozen poems (Wallace calls them sonnets, though because they lack end rhyme and iambic pentameter, I would call them sonnet-inspired) each containing a classic haiku formed by the last words of each line. The right margin of “Song of Myself,” for example, which cites Issa as its source, can be read downward to reveal the following haiku: “heedless of the dew that marks our closing day we bind ourselves to others.” The poem itself opens this way:

I think it’s enough just to sit and meditate, heedless
of the needs of others close to us and of
their perpetual demands that seem to sap the
strength from us…

The title obviously references Whitman, and the poem also comments on Thoreau’s preference for solitude. Whitman’s work suggests that he was much more sociable than Thoreau, but the two share a tendency to center their interpretations of the world within themselves. Thoreau enters the poem at its turn, but then it turns back on itself, contradicting the assertions it has made for thirteen lines:

…Thoreau knew how to spend the day
alone with his peas and beans and ledgers, and we
can do the same. So much for the ties that bind.
“We must find our occasions in ourselves,”
said self-reliant Thoreau. And so I’m going to sing to
myself. And the birds. And you. And one or two others.

This speaker’s song may be “of myself,” but it is not exclusively “to myself.” The accumulating  “And…And…And” of the final line belies the speaker’s insistence on solitude, or even on self-reliance. At least in terms of self-expression, human identity is communal.

The rhythm of these lines is particularly interesting, especially as it is affected by the line breaks and the caesuras. While three of the lines are end-stopped, two with periods, these lines contain five internal periods. These hard caesuras sound even more definite than the end-stopped line breaks. As occurs in much of Wallace’s work, this excerpt reveals how flexible the line can be.

There’s much more to discuss about For Dear Life—its humor, its arrangement, its responses to popular and classic culture. If I were able to interview Wallace, I’d ask many questions about his craft. Until then, though, I suspect the answers can be found in a close and sustained reading of his work.

Nearly twenty years ago when I read Marilyn Krysl’s Warscape with Lovers, already her seventh collection of poetry, I learned something crucial. Krysl is, as anyone who has read much of her work knows, a master of the sestina. It’s a form that’s easy to write very badly and extraordinarily difficult to write at all well. Its six repeated words, the teleutons, can so dominate the writer’s consciousness that the entire rhythm—not only the content—of the poem is controlled by their presence. All movement in the poem is thrust toward them, even if the lines are enjambed and the sentences develop beyond them. Reading Krysl’s sestinas, I noticed a different strategy. In “Nammu: To Adam,” for example, or even moreso in the book’s title poem, “Warscape with Lovers,” Krysl relies on other content to determine the rhythm, lovemaking or an ocean’s waves or fear. The rhythm of the line, therefore, becomes at least as strong as the lexical repetition required by the form, until the repetition recedes from the reader’s ear. Sestinas so often collapse in on themselves—much more often than poems in other forms—but Krysl’s escape this fate because she approaches this potentially heavy-handed form with an extraordinarily light touch. Once I understood why Krysl’s sestinas succeeded so well, I understood form itself much more fully. There are only two or three other contemporary poets whose work has taught me so much.

So I was very glad to be able to read Yes, There Will Be Singing, a collection of Krysl’s essays. Three of the essays focus on the sestina specifically, and another explores the litany, whose core definition is also repetition. In these essays, Krysl analyzes several examples that work differently from each other, and she discusses the attraction of repetition generally, along with the necessity of variation. I particularly appreciated her engagement with James Cummins’ “Tiresias”—which uses “father,” “woman,” “man,” “mother,” and “face” (used twice) as its teleutons—and Patricia Smith’s sestina about Stevie Wonder, “Looking to See How the Eyes Inhabit Dark, Wondering about Light”—which uses light,” “wonders,” “dark,” “eyes,” “see,” and “look” as its teleutons. These two poets had clearly set themselves a challenge, and Krysl’s explanations of their strategies are both insightful and useful. Through her close analysis of craft, Krysl shows the reader not only how these particular poems were written, but also how more poems might be written. Patient with the work, she is an attentive teacher.

This section on the sestina follows the opening section of the collection, containing five essays that are predominantly autobiographical. Their focus is language and how Krysl came to appreciate it as a way of making and revealing meaning as well as a source of musical pleasure. Three additional sections follow those on the sestina and litany: “Illustrious Forebears,” “Poetry as a Way of Witnessing,” and “Poetry and the Healing Arts.” The essays in the first two focus on individual poets, including Marianne Moore, Anna Akhmatova, W.S. Merwin, Ingrid Wendt, and others. The final section returns to Krysl’s own work, describing the relationship between her writing and her experiences caring for the destitute. As a whole, then, this book illustrates the integration of the work and the life.

As a working poet, I most appreciate the poet-critic who can comment on the content and context of a poet’s work as well as evaluate the craft, analyzing the poet’s strategies with language. When I am particularly affected by a poem, I want the critic to answer my astonished question: “How did she do that?” Through her experience in the world and her thoughtfulness about poetry, Krysl guides the reader through several poems by positioning the poems within their context and by describing how context and craft interact. In her chapter on Ingrid Wendt, for example, she discusses William Stafford’s influence on Wendt, focusing particularly on their mutual commitment to nonviolence and to their concern for environmental sustainability. Analyzing Wendt’s poem “Endangered Species,” Krysl attends to the poem’s grammar, its sentences and lines, to show how she succeeds artistically while simultaneously engaging the world as a responsible citizen: “the poem ‘Endangered Species’ is much more than an evocative description of wild turkeys. ‘Endangered Species’ is a political term which highlights the fact that the violence of species depletion is violence visible only in statistics. Wendt highlights the extremity of species’ deaths by a cunning use of the words ‘if’ and ‘as if’—‘if’ through the body of the poem, ‘as if’ at the poem’s conclusion. Notice how ‘if’ builds a chain of linked contingencies…” The poem Krysl cites is evocative, and it is not trite. Her discussion demonstrates how through attention to craft, poetry can be made more rather than less relevant to significant cultural issues.

Yes, There Will Be Singing consists of highly interesting essays, and so in that sense it feels like a quick read. The essays are also often meditative and thought-inspiriting, so in that sense it also feels like a contemplative read. It is a book that speaks to our time. Given the unfortunate complexity of the interrelated problems—war, poverty, environmental destruction, hunger—that are ours to solve, I imagine it will remain relevant for quite a while. Fortunately, the quality of the writing will make it a congenial companion as we discern our responses.