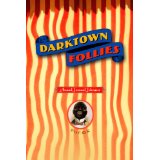 Darktown Follies, Amaud Jamaul Johnson’s second collection of poems, is intriguing both for its content and its craft. In fact, the first time I read it, I didn’t think I understood it, but I returned for another reading because of the poet’s skill with sound. The alliteration, the assonance, the consonance, the rhyme and near-rhyme—he relies on it all, with enough originality to captivate the reader’s ear and reinforce the content but not so much that it overwhelms the poems. As I began rereading the collection, I wondered why I’d been confused the first time. This book is engaging and disturbing, or at least at times uncomfortable, as the reader both identifies with the speakers and understands herself to be critiqued by them.

As an example, the opening poem, “Encore,” begins with a sentence that seems to have as its primary concern an exploration of metaphor:

Take the architecture of the wrist,
how the hands flit, hinged

of the lake, or the way the whole flock,
given the hound dog’s solfeggio

& the report-refrain of some pistol,
how each tendon, how every muscle

of the limb seems to reach
some agreement & move.

These couplets describe the movement of one joint in the human body, and though that movement may occupy only a few seconds of real time, the poem stretches it out in order to examine the movement in terms of other types of movement—a bird or a flock of birds lifting from a lake. The language here is attractive: “bony as a blur of wing,” “the report-refrain of some pistol.” The reader becomes invested in the attention and thoughtfulness the speaker devotes to such movement, the clapping of hands, which can sound like “the report-refrain of some pistol.” But then, after an extra space break, we read this:

Even the box seats & the balcony,
the taste of that song tangled

like moss about my Adam’s apple,
& I see them beginning to stand

& applaud, & if I could spoon
out every eye, or fasten their tongues

The first four lines of this second sentence seem to emerge logically from the first sentence, until we reach the caesura of line five. The wished-for violence and vengeance is particularly startling after the beautiful and nearly romanticized imagery of the first sentence. This is what I mean when I describe the reader’s position—at least this reader’s position, this liberal white reader’s position—vis-à-vis the speaker of the poem. I believe I can understand the speaker’s response, positioned as an entertainer whose racialized self is a component of the entertainment, and yet I also share the privilege of those who would comprise the audience. Whether or not I want that privilege (and who among us doesn’t want privilege, at least sometimes), I have it.

The poem continues with the speaker restraining his urge by recalling the benefits he will receive through this performance:

…Think,
come morning, the both of us, rich men.

So I wait for them to release
their bellies, to rest their elbows,

to stop slapping their knees. I adjust
my top hat, smooth my hands

against my breast & tail. I step
center-stage. I steady, I steady

The audience of this performance likely believes they have been simply entertained, but if so, they are naïve. Readers of the poem, however, cannot claim such innocence.

Here is “The Front Matter,” the second poem in the collection, which foregrounds many of the sonic effects that Johnson is so skilled with, but which also challenges readers to recognize that the playfulness of the language isn’t all there is:

Pity the ringdove, the silver-tongued
Coxcomb, throb and pulse, the hurly
Burly of the hurdy-gurdy man. Pity
The pomp, all the prunes and prisms,
That miscellany of light located beneath
The lips and gums. It’s all that cockeyed
Peacockery, the dumb show high flown,
Guffaw, and that garbled moonlight.
Now, I got the big talk. I’ll play the heavy.
Watch me in my cap and bells, my jingle.
In a nutshell, all patter and ballyhoo aside,
I’m aping the Sun. I am the Jack-pudding.
I reckon to out herod Herod, and trademark
My move.

The words in this poem are fun to say. Initially, it sounds simply exuberant, even raucous. The dynamism makes me want to laugh. But the speaker’s desire to “out herod Herod” sounds ominous, though what the speaker promises isn’t as threatening as King Herod’s decision. The speaker will “trademark / My move,” forcing anyone who wants to incorporate his performance in another act to pay a fee. The speaker, in other words, is hitting his competitors, the theater managers and producers who might want to imitate his success, where it hurts. There’s a lot more to say about this poem, particularly some of its allusiveness, but I also want to consider the second section of this collection in the space I have left. So rather than analyzing “The Front Matter” more thoroughly, I’ll leave it to readers to sit with it, reaching their own conclusions.

The second section, titled “The Olio,” is quieter and more personal. Even so, Johnson still exploits the sounds of English, and his ability to manage this for such different purposes testifies to his skill. For example, “Midnight at the Abandoned Monastery” begins with this stanza:

We were reluctant to walk.
The last few glasses of vino
Had tinted the dying Tuscan sky.
But enough were game, so
The girls changed into their sensible
Shoes, and the overly prepared,
Who bragged about bow hunting
And the shades of deer blood
Near their Virginia home, had packed
Plenty of headlamps to please the mob.

The alliteration, assonance, and consonance in this stanza are subtler than in “The Front Matter,” but the poem nevertheless achieves its effect in part through Johnson’s control of its sound. The poet’s care with these poems encourages me as a reader to attend to them with equal care.

The second section of Darktown Follies, functioning as a second act to the poems in the first section, “The Walk Around,” inevitably comments on those poems in the first section. The more personal nature of these later poems suggests that the performances described in the earlier section have not been relegated to the past. The ambivalence in relationships between audience and performer in early twentieth-century vaudeville continues to characterize relationships among Americans today. This collection reminds us how far the past is from being over.

To propose a guest review or submit a book for potential review, fill out the contact form or contact Lynn Domina directly at lynndomina (at) gmail.com.