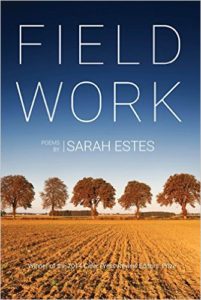 Sarah Estes’ Field Work had been sitting in my to-be-read stack for several months, and every once in a while, I’d sort through the pile and think, “I should read that.” Now that I have, I wish I’d read it much sooner, for it is a thoughtful and thought-provoking collection of lyric poems, grounded in wisdom and informed by struggle. The poems acknowledge grief and loss, but they strive toward acceptance of these experiences as components of the life we are given to live.

This is what God is. Water.
This is what survival is. Swimming.
You don’t realize until entirely immersed.
Until your suit is a purple skin.
Until the lines of yourself
have begun to slip

from meaning.
And you see your hand
plunging you forward, the way a fish
jumps into what it was not made for.

When it is your own hands pulling you
through the water, you begin to think you
are strong. That strength is something
like loving the air, but not the air you
breathe into your own lungs.

Ironically, the poem suggests, it is when the boundaries separating ourselves from the rest of creation dissolve that we most believe ourselves in control of our circumstances. Theologians and psychologists have asserted similar ideas, but, for me, the abstractions of theology are never as pleasurable as the metaphor of poetry. The ideas Estes explores in “The Fall” are interesting, but the poem is successful because its language is vivid. The extended metaphor is so effective that readers forget they’re immersed in metaphor until we reach the end of the poem, pause, and return to its beginning.

How does Estes seduce her readers into interpreting figurative language as realistic, accurate description? This poem demonstrates Estes’ mastery of craft. Its effect on the reader reproduces the water’s effect on the “you”: “You don’t realize until you’re entirely immersed,” in water or in language, what it is that surrounds you. Both the sounds of the words and the appearance of the lines on the page reinforce the imagery, for whether this water is river, lake, or ocean, its rhythm is recognizable. The relationship between end-stopped and enjambed lines illustrates how Estes exploits craft to develop her theme. The first four lines are end-stopped, and the first two also contain definite caesuras; the rhythm of these lines is abrupt, just as their content is stated directly. After line four, however, the next two lines are enjambed, with end-stopped lines occurring further and further apart.  The rhythm, that is, becomes smoother and softer as the “you,” the reader, imagines herself more and more fully immersed. Where the lines are enjambed is as important as that they are enjambed, for meaning resides at least as much in the line as in the sentence. In stanza three, for example, the meaning would shift subtly if a line broke at “strong” or “strength” rather than at “you” and “you” and “something.” Estes places “strength” close to “strong,” so that the synonyms themselves increase their strength, but not nearly as much as they would if they’d been placed at the ends of lines. Their placement in the middle of the line instead subtly undercuts their strength. Estes also relies on assonance and alliteration to both vary the rhythm of the poem and reproduce the rhythm of water. Because so much is going on in this poem and because its elements so enhance each other, the pleasure of “The Fall” increases with each reading.

Clearly, “The Fall” explores the relationship of the self with the divine. Other poems expand Estes’ exploration of relationship, incorporating the self and family, the self and strangers—often much less privileged strangers—into this primary relationship. Or perhaps a better way of saying this is that the collection is organized to reproduce a speaker’s emergent understanding of her place in the world. The last section of Field Work consists of several poems set in southeast Asia. In these poems, close relationships among members of the speaker’s family merge with encounters with others. Although poems that depend on foreign locales for their content often drift into superficial presentations of exotic sites and sights, Estes is as committed to accuracy and understanding here as she is in poems set in middle America.

Field Work contains poems that vary in form as well as content. Estes is particularly adept at exploring the nature of the line, not only where to break it as I discussed above, but also whether it ought to begin flush left, how far to extend it or how radically to trim it, what its relationship is with the sentence and with the stanza. The voice, though, is consistent throughout—thoughtful, serious though not solemn, quietly inviting. It is a voice that, I hope, will have much more to say.