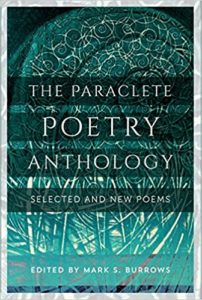 Paraclete Press has, over the last few years, become one of the most prominent publishers of contemporary poetry emanating from the Christian tradition. Their list includes some of the finest poets writing today, and their production values mirror the quality of the literature. So it is no surprise that Mark S. Burrows, poetry editor at the press, has also edited an anthology featuring several of the poets they’ve published. Some of the poets featured here will be familiar to many readers, e.g. Scott Cairns, Paul Mariani, Rainer Maria Rilke; others will be familiar more likely through their writing in other genres, e.g. Phyllis Tickle, Thomas Lynch; others still may be new to many readers, e.g. Paul Quenon, Fr. John-Julian. In addition to Rilke, the book includes two other poets in translation, Anna Kamieńska and Said. Several other poets are well-published but not yet as known as they should be—Bonnie Thurston, Greg Miller, William Woolfitt, and Rami Shapiro. One of the most gratifying features of the book, though, is its inclusion of new work be each of the poets (with the exception of Phyllis Tickle), as well as poems from collections published by Paraclete.

I could easily devote several pages to discussions of each of these poets’ work. As with reviews of most anthologies, it’s nearly impossible to do justice to the collection by focusing on only one or two of the contributors, especially when they write in such different styles and examine such a range of topics—both good things in an anthology. In an attempt to suggest this collection’s range and also to write a review of reasonable length, however, I’ll discuss two poems by two quite different poets, trusting that readers will be intrigued enough by these examples to explore the book further.

William Woolfitt’s “Flat-Spired Three-Toothed Snail” functions on one level as a description of one creature’s difficult life during drought and on another as a metaphor for the speaker’s and perhaps reader’s own experience of spiritual dryness. The poem opens with a stanza describing the environment:

This stanza succeeds for several reasons, but most particularly through its concrete language and strong rhythm. The metrical insistence of the first line, consisting of two consecutive spondees followed by one trochaic foot and a final accented syllable, is augmented by its hard consonant sounds. The second line slows down a bit, with its longer and softer sounds, but it retains sonic interest, opening and closing with spondees, though these are less obvious than the pair in line one. (This poem—like many of Woolfitt’s—is  written in comparatively regular stanzas, but it is not composed in a strict received form. It is clearly informed by metrical practice without being enslaved by it. I’m paying so much attention to Woolfitt’s attention to meter—or if not meter, at least rhythm—because one significant challenge of free verse is to retain music, a challenge Woolfitt meets particularly well.) Additional devices enhance the music—the consonance and alliteration of “blazes…kindle…leaf litter,” the assonance of “hot…copper scorch.” Such attention to craft keeps a reader reading, even when the reader believes she’s attending only to content.

The poem concludes with these affecting lines:

Three-tooth secretes his shell, shapes
its apex and spire-whorls, patches
the temple that houses him,
mixes his mortar from calcium
in the dark soil that he eats.

While objectively accurate, the details in this last stanza are also emotionally and symbolically evocative. Through feeding itself, the snail provides for its safety. Despite its arid and arduous environment, the snail, in doing what it was created to do, survives. Even in its driest season, the snail receives what it needs. I don’t think I will ever forget that final image, “the dark soil that he eats.”

The contributor whose style is perhaps most different from Woolfitt’s is Said. His longest poems are ten lines, and his lines frequently consist of only three or four words. In his earlier poems, he addresses God directly, and even his later poems, wherein the audience is less specific, read like prayers. Here is one of his poems (they are all untitled) in its entirety:

According to Islamic tradition, God has 99 names (though some sources suggest many more), with the 100th name hidden. The speaker here in asking to become acquainted with all of God’s names is asking to know God fully, to let nothing of God remain hidden, even the final name which is both hidden and “Hidden.” The speaker is humble, recognizing the possibility of being “immobilized by my own light,” that is, by the light of the created rather than of the creator. The poem begins peculiarly though, with the speaker it seems giving God permission to “pray to everything / that is near me.” Does God pray? If God prays, what would God pray to, or about, or for?

As a poem, this piece relies most on lineation to achieve its effect. The lines most often alternate between longer and shorter, so the rhythm speeds up and then slows down. Although nearly every line reproduces a grammatical unit, Said (or Burrows as his translator) nevertheless exploits line breaks so that meaning becomes augmented through the surprise of what comes next. To demonstrate how line breaks matter in free verse poetry, imagine that the second line broke after “pray” rather than after “everything.” The emphasis, the meaning, of the sentence would entirely shift, for a line like “to everything that is near me” suggesting a solipsism contrary to the poem’s purpose. At first glance, this poem looks simple, and its simplicity is part of its strength, but its simplicity is neither arbitrary nor easy to achieve.

The work of the other poets in the anthology are equally interesting. The representative sample of each poet’s work is large enough to pique any reader’s interest and to demonstrate the consistency of the poets’ styles and strengths. The book is a welcome introduction to Paraclete Press’ poetry list—I look forward to a second volume featuring their newer poets in a few years.