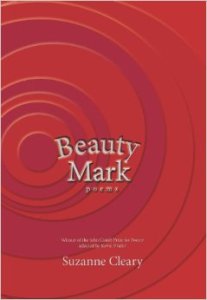 Beauty Mark, Suzanne Cleary’s third collection and winner of the John Ciardi Prize for Poetry, is an ambitious and dynamic response to popular culture. The speaker seems to address the reader directly if not exactly intimately, the way extraverts comment their way through encounters, entertaining their companions with energetic observation. Cleary’s close consideration of the ordinary leads her to metaphor, even to the transcendent, yet the shift from concrete to abstract, from literal to figurative, is subtle. The world of the figurative is as attractive as the world of the literal.

For example, “Temporary Tattoo” opens with the speaker in a bookstore noticing a “bowl of what seem to be postage stamps” though they are, of course, temporary tattoos. What follows is a riff on impermanence, for tattoos are meant to mark our bodies permanently:

…A tattoo should be permanent,

a commitment, a cross-hatched cobra coiled
around the biceps, inks of deep blue and green
like the veins that pop from the carney’s arm

when he makes a fist. A tattoo should not
smear, dissolve with baby-oil-on-tissue,
should be bold as a snake swallowing a mouse

and the mouse-shape traveling the length of it
like a bad idea shaping a life, distorting a life.

Here we have simile (like a bad idea) embedded in simile (bold as a snake swallowing a mouse), preceded by an additional simile (like the veins that pop)—yet the imagery remains clear, easy to follow, and compelling—for who among us can turn our eyes from that bulge inching through the snake? The poem then returns to the tattoo, of an apple:

its single leaf the green of the 1964 Chevy convertible
on cinder blocks behind the bookstore,
a car that will never run

despite the young man who works
under the hood every night until dark.

Readers might, at this point, have begun to wonder whether these images are simply associative details, interesting as they might be—but where’s the point? The point is the nature of impermanence, the idea to which we’re about to return, as the poem begins to address the young man who stands for us all. “Someone” ought to give this young man a piece of good advice: “Tell him the Chevy’s time / has come and gone, that nothing lasts forever / except our desire for things to last forever.” Temporary tattoos don’t last, of course, and neither does a Chevy. Nor the mouse, nor the snake that eats the mouse. Nor do we, which the poem avoids stating directly, turning against itself instead as it concludes: “in the gravel lot behind the bookstore / the last of the sun shines / pink, and everywhere, and always.” Do we believe it? Not literally, but we recognize our desire to believe it. With this last line, the poem circles back upon itself, the pink of the sun reminiscent of the red of the apple on the temporary tattoo with which we began, confirming our suspicion that the final assertion of permanence is more hope than fact.

“Temporary Tattoo” is composed in tercets, the lines fairly evenly divided between end-stopped and enjambed. Many of the poems in Beauty Mark are composed in regular stanzas, tercets mostly with occasional quatrains and couplets. Several poems consist of one long stanza, but even in these, Cleary often indents alternating lines, the extra space suggesting a subtle break. The lines are generally long, sometimes fourteen or eighteen syllables, so the rush of the lines is balanced by the regularity of the stanzas. The poems demonstrate both exuberance and restraint—though it is the exuberance, I suspect, that most readers will remember.

“As the Story Came Down to Me” illustrates Cleary’s poetic strategy as well as her manner of thinking. The poem opens with an odd family detail: “My grandmother was arrested / nearly, for driving with too many saints on her dashboard.” The speaker describes the police officer, the car, the “nine plaster statues.” Exactly two-thirds of the way through, the poem turns, in the manner of a sonnet, to the speaker-poet’s composition. The speaker confesses that she has “lied in saying it was my grandmother, / although I did in fact see an old woman / driving a dark blue Chevy with saints.” And she’s lied about the police officer and the number of statues. As poets know, few of the details in our poems are factual, and yet our poems are still true, and we write them to understand how we perceive truth, as Cleary states so movingly in this poem’s last lines: “I swear the short white-haired woman / peering through the space between Joseph and Mary, / I swear it brought tears to my eyes, / and I am still trying to figure out how.” This poem illustrates the argument writers often make, that sometimes you need to invent in order to tell the truth. Whether or not we agree with that argument, we respond to the poem.

Beauty Mark is more playful than many of the collections I’ve read during the last couple of years. Even the titles of many of the individual poems are playful: “Cézanne’s Clogs,” “God Visits the Televangelists,” “Imagining the Shaker Meeting at Which the Founder Ann Lee Announces the Policy of Sexual Abstinence.” The titles made me want to read, and the poems made me want to keep reading. I did, and I’m glad.