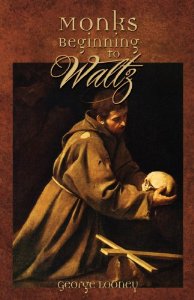 Beginning to waltz or participating in other activities, monks show up frequently in George Looney’s sixth collection of poetry. So do artists, particularly Caravaggio, and violins and hearts and various species of birds—vultures, crows, parakeets, loons, and that other Bird, Charlie Parker and those other flying creatures, angels. What this suggests is that Looney is comfortable drawing from classical culture as well as nature for his imagery, metaphors, and motifs. Despite this range, the poems individually and collectively explore one dominant theme—the spiritual longing that works through and yet somehow transcends mortal flesh. Hence Caravaggio, that painter of fleshly abundance. Hence the birds, those beautiful fluttering creatures who are here and then gone, who embody our desire to rise above the very flesh that weights us to this life.

The opening poem of Monks Beginning to Waltz, “The Sorrow and the Grace of Vultures,” exemplifies this theme, and it is a particularly successful example of Looney’s craft. It is also my favorite. Through deft line breaks and carefully placed pronouns, the poem exploits ambiguity, not to confuse but to engage a reader’s conscious attention with the scene at hand. Most of us don’t ordinarily associate vultures with grace, either its physical or the spiritual form; yet the poem begins with the speaker’s father asserting that connection: “My father says they prove grace is possible / even in this world, // that memories only need the occasional / slow drag of wings to stay aloft.” This metaphor is accurate, I think—memories do stay with us without much effort, or reappear suddenly as if brought back with the breeze. But why would grace be affiliated specifically with buzzards, rather than with some more delicate or more majestic or simply more beautiful bird? The speaker interrupts to insert what seem to be his own metaphors: “They drift / thermals off flat tar, dark angels // some Italian might paint. I’ve seen them pray / over a deer with a second skin of flies, // an altar panel Tiepolo would not have / placed behind the cross.” Are dark angels necessarily demons? When buzzards pray, do they praise death? Is this poem going to become simply macabre, or is its author up to something else? I found myself both fascinated and repulsed by this imagery, yet also intrigued by a speaker who could imagine grace enveloping even a buzzard.

The poem contains an embedded story that reveals the relationship between grace and buzzards, a story in which buzzards become like angels, messengers of God if, as the speaker’s father wonders, God is who we’re praying to when we pray. A soldier during World War II, the father had found himself hiding out in an Italian church, along with several other soldiers, some wounded. “A local told him // Tiepolo painted the frescoes that flickered / around them. Explosions // brought the stained glass to life. / In the tortured light of saints // they cowered in the rafters.” They? By this point, readers have likely forgotten the buzzards, or momentarily set them aside, but within a few lines, we’re reminded that these birds led us into the poem, and now they’ll lead us through the story. “Could’ve been / the end of the world for all // they knew, he says. The wounded were / so afraid my father and a friend // opened fire. The first hit hung there, / claws stuck in wood. // It fell later, in the silence after / the shelling. They had to // shoot the rest out of the air. It was / awful, he says. Trapped // by the amnesia of panic, they flapped / from stained glass to wood, // looking for the rip artillery had left in the roof / where they had come in. // One finally broke through the flickering image / of Saint Francis and died. // Two escaped through the shattered monk.” Within seventeen lines, Looney has used the pronoun “they” five times. On each occasion, the referent of “they” is certain or nearly certain, yet readers understand that lingering beneath the buzzards’ panic is the panic of the soldiers, and the end of the world could be near for all involved. Looney’s choice to rely on a pronoun rather than on a series of nouns, in other words, contributes to the poem’s depth and complexity; seldom is a poem’s success so dependent on “they.” As the poem moves toward its conclusion, the layers of meaning depend less on grammar than on the connotations of icons. The image of St. Francis, patron of animals, leads not to freedom but to death, at least until the saint himself becomes “shattered.” These two buzzards who live through the ordeal to escape become “angels who flew / through Francis into a sky, // broken, with room for grace.” The father believes in this grace because he believes in forgiveness—for the multitude of sins implicit in this story, many of them almost unavoidable for the individual soldier.

If I would ask anything else of this book, it would be for greater stylistic variety. (With one exception, all of the poems are written in couplets or in a combination of couplets and tercets.) Yet the book’s consistency also contributes to its virtues, the consistency increasing the pressure, with each poem, to make it new. Looney does that by taking the old questions seriously, by insisting on meaning even in this modern devastated world.