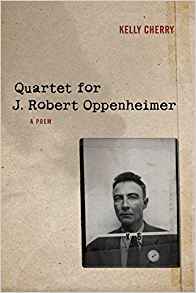 One of the pleasures of following Kelly Cherry’s work is that it’s so varied—every book explores new territory. She has written in multiple genres about topics that fall within numerous academic disciplines. She seems to surrender to her obsessions, permitting them to lead her where they will. Her latest collection, Quartet for J. Robert Oppenheimer, benefits from the range of her interests, as it does from her discipline as a writer, for with this book she has set herself an intriguing challenge. On its most obvious level, the book functions as a poetic biography of its title character, but it reveals the character of Oppenheimer and the experience of his times through references to T.S. Eliot and his own quartets, and to The Aeneid, as well as many others. Cherry structures the book as a modern epic, though one developed through lyric as much as narrative. The individual poems, though not always written in received forms, contain sufficient echoes and instances of meter to feel regular. Cherry’s skill with craft, in other words, permits her to weld formal to free so as to almost create a hybrid of the two.

The opening poem invokes the muse in the manner of Homer or Virgil, but it doesn’t take itself too seriously: “Invoke a muse? How quaint.” However, Cherry also suggests that those of us modern writers  who consider a muse as little more than a conceit might want to rethink our attitude: “But is it quaint, / considering that words appear upon / the page almost before one’s thought of them.” She’s right, of course; when the writing’s going well, it often does feel as though something beyond our consciousness is guiding our hand. This invocation adheres to the tradition, asking for the right words not to bring the poet glory but in order to praise the epic hero appropriately, to honor “a man, if not his killing weapons.” A challenge for writers who wish to bring an old form, especially one that has been nearly abandoned by contemporary writers, into a modern context is to decide which of its elements to retain and which to relinquish. Cherry addresses that issue already in her invocation, asking to praise the book’s hero without glorifying war. The ethics of a national poet, if that is what the creator of an epic is, have changed in the millennia between the classical period and our own.

Undoubtedly because of my own readerly training, I found the poems that imagine Oppenheimer’s emotional life most compelling. The first section of the book traces Oppenheimer’s childhood and young adulthood, as he begins to reconcile himself to his difference from others. The opening of “East and West” provides an example of Cherry’s approach:

Hard-working German Jews on the Upper West Side
put distance between themselves and the Ostjuden,
who, they thought, were too Jewish, redolent
of shtetls and ghettos.

The strange off-rhyme of “shtetls” and “ghettos” catches my attention first, along with the assonance of those words and “redolent.” But even in the first line, we notice the assonance of “working German” and the alliteration of “German” and “Jews.” What’s particularly intriguing about these choices is that the similar sounds are most often not reproduced in the spelling, the soft “G” in “German,” for instance, alliterating with the “J” in “Jews, or the “or” in “working” creating assonance with the “er” in “German.” The reader’s ear is challenged to do all of the work rather than sharing it with his or her eye. The music is more surprising than it would be if we could see it coming, and that surprise offers bonus delight.

Cherry brings Oppenheimer into this poem in its second half. He was the son of one of these embarrassing new interlopers, but maturity is accompanied by perspective:

like Mark Twain, he discovered that the old guy
had somehow learned a helluva lot, and then
belated love for the father flourished in the son’s heart.

The shift in diction catches the reader’s attention here—another instance of the poet not taking herself too seriously—and the casual vocabulary protects the last line from sentimentality.

The last poem in the collection, “Ashes and Stardust,” is both transcendent and realistic. Oppenheimer has died, along with most of his generation and many of later generations. Each of us is here and then gone. That fact, however, does not evacuate life of its meaning. As the poem says, some leave evidence of themselves in books or art or scientific discoveries, but most do not. Most people loved at least one other person during their lives, and many of us love many others, but evidence of that love disappears eventually too. Surrender to nihilism is tempting here, especially given the book’s focus on a discovery that has made immense destruction possible, but the poem concludes more compassionately: “We are here and then nowhere. Not there. Not there.” This line doesn’t suggest resignation as much as it does mystery. Even with all of the knowledge Oppenheimer acquired and created, even with all of the knowledge required for this book to have been possible, that mystery remains.

A thorough discussion of Quartet for J. Robert Oppenheimer would take pages and pages more. There’s much to be discovered in it. It is erudite and it is allusive without being at all pedantic. It is a book that could only have been written in our time, not simply because of its subject but also because of its ability to praise and critique simultaneously, to reference generic conventions without being bound by them, and to tease the reader with its shifts in levels of discourse. It is a book that deserves to be read, yes, but also engaged with, discussed, analyzed, and argued about. I hope I’ll be able to meet up with some of its other readers to do just that.