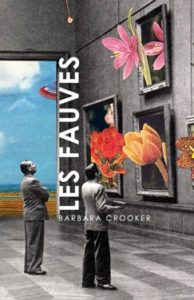 Barbara Crooker’s most recent collection, Les Fauves, considers two primary subjects—visual art and language. Those subjects are admittedly broad, but her approach narrows them considerably. The book is arranged into four sections, with the first and fourth primarily exploring specific paintings by artists like Matisse and Van Gogh while the second and third consist of poems whose forms depend on language play or that respond to peculiarities of language in daily life. Initially, these two sources of material might seem decidedly distinct, but it is the notion of play that connects them. One of the early poems quotes Gauguin: “if you see / a tree as blue, make it blue.” Painting, even representational painting, need not be absolutely realistic, any more than language guarantees any absolute identification between signifier and signified. These poems have encouraged me to think about painting differently, and they’ve also offered me a lot of fun.

The second poem in the collection, “Odalisque avec Anémones, 1937,” demonstrates much of what Crooker does best in this collection. It opens with these lines:

Delacroix said Banish all earth colors, and Matisse
took this to heart, not a smear of clay, dirt or sand
anywhere in this painting. Anemones—red, orange, purple—
drape themselves in front of the woman lounging
on the divan, her red-striped yellow wrapper falling open.

The comparatively long lines here, typical of many of the poems in the collection, permit Crooker to exploit opportunities that distinguish poetry from prose. Beginning and ending the first line with painters’ names, for example, emphasizes the significance of the artist, and it also defers the reader’s satisfaction—will Matisse accept this advice regarding color or not? The second line with its string of monosyllables adopts an interesting rhythm (one other line in the poem consists exclusively of monosyllabic words, but its rhythm is entirely different, a fact attentive readers will find pleasurable). The third line enacts what I most appreciate about the poetic line; it augments the meaning of the sentences. The first sentence means that no “earth colors” appear in Matisse’s painting; the second sentence shifts to the bright anemones and their positions vis-à-vis the woman. The line, however, suggests the additional possibility that the anemones fill the painting. Ekphrastic poetry presents particular challenges regarding visual imagery—it’s almost impossible for a poem to be as visually stimulating as a painting—but Crooker rises to that challenge throughout the collection, and as these lines demonstrate, she also attends to elements of poetic craft that visual art cannot provide.

Midway through the poem, the subject shifts from the painting itself to the speaker and a companion. Crooker creates a series of images reliant on the color yellow, beginning with line five above, and leading to a moment in a café where she experiences unexpected happiness:

the one with the surly waiter in the striped jersey
who wouldn’t bring us bread, then brought us the wrong wine.
But the day was warm, and our lunch, when it came—
grilled sardines drizzled with oil—was just what we wanted,
and we were happy in the sun on the white wicker chairs,
something blooming in my heart, anemones
spilling from their vase.

I enjoy the sonic effects of these lines, particularly the assonance, alliteration, and repeated anapests.  But even more I appreciate how these concluding lines return so satisfyingly to the poem’s opening. The shift in subject that occurs in the center of the poem develops naturally and would have been enough of an ekphrastic response, but the last two lines, risking sentimentality as Richard Hugo says we must without collapsing into it, elevate the poem’s accomplishment. We’ve almost forgotten the anemones until, ah, there they are again.

A few pages later, we come to “Les Boulangers,” one of the most exuberant poems in the collection. The poem is a celebration of that most ordinary and delicious substance, bread. It begins with an appreciation of those most responsible for bringing it to us, the bakers, and proceeds quickly to a litany of thanksgiving for its wonderful variety:

Blessed be the breadmakers of la belle France
who rise before dawn to plunge their arms
into great tubs of dough. Blessed be the yeast
and its amazing redoubling. Praise the nimble
tongues of those who gave names to this plenty:
baguette, boule, brioche, ficelle, pain de campagne.

With its focus on language, this poem might have been placed in section two or three of the collection, but it more appropriately belongs where it is, among others set in France. Crooker’s skill is particularly evident in this poem, with the alliteration in lines one and six, the pun on “rise” in line two, the variation in placement of “Blessed” (a variation which continues in later lines), and the shift from “blessed” to “praise” to keep the list engaging. As the poem reaches its conclusion, having blessed every possible aspect of bread, including butter and crumbs, the focus shifts, demonstrating the surprising suggestion that praise is characteristic of humility: “And bless us, too, O my brothers, / for we have sinned, and we are truly hungry.”

There’s much more to say about Les Fauves. That’s the thing with good books—you just want to keep talking about them. But you also want to return and reread, and that’s what I shall do now.