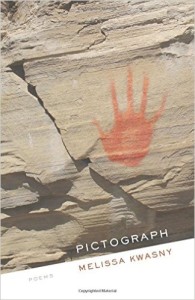 Melissa Kwasny’s latest collection, her sixth, consists of a series of prose poems many of whose titles contain the word “petroglyph” or “pictograph.” These poems are ecological in the deepest sense, for although they acknowledge human viewpoints, they refuse to be centered in the human. The speaker observes closely, meditating on what she sees—birds, hares, red drawings on rocks. And though the speaker is sometimes accompanied, or at least addresses human relationships whether or not a companion is literally present, the mood of this book is solitary, and from that solitude honesty emerges. The speaker isn’t speaking so much as mulling over her experience in a world that has been created as a refuge for all creatures. And yet, through their titles and subject matter, the poems also draw attention to human consciousness and expression, human connection across millennia. The meaning of this expression sometimes remains mysterious, as one title, “Pictograph: Possible Shield-Bearing Figure,” makes clear, but though witnesses may not absolutely understand the meaning of a given figurative symbol, those witnesses do understand the urge toward expression and experience a reciprocal urge toward reception. Kwasny’s success in this collection stems from the confluence of these factors: the reader trusts the writer and so follows her through this meditative experience, and the writing itself rewards the journey.

Before I take a closer look at any of the poems, I need to confess that I’m often suspicious of prose poetry as a genre. Not every descriptive paragraph earns the title of poem, regardless of how its author classifies it, and much of the time when I read prose poems, I wonder what the poem gains from its form that is worth sacrificing the power of poetry’s line. Then I begin to wonder whether the prose poem is simply a way for the writer to avoid attending to much of the craft of poetry, for I sometimes find prose poems wordier and rhythmically flatter than conventionally written poems. If a prose poem has a narrative thread, I wonder why it’s called a prose poem, rather than, say, flash fiction (an admittedly recent term). On the one hand, labels ultimately don’t matter much. On the other hand, art of any genre comes with its conventions, so when writers reject those conventions, their choices should be more than arbitrary. All this is to say that I surprised myself as I began to read Pictograph; I had to lay down my prejudices. This collection has taught me that prose poetry does have a legitimate place in contemporary writing, and it has taught me a “formless” form presents its own sufficient challenges to a receptive writer. (I realize now that in speaking of prose poetry, I am rehearsing some of the same arguments that have surrounded the validity of free verse—there’s a lesson here for me, and I suspect for others.)

Here is “The Wounded Bird” in its entirety:

In order of least shyness: evening grosbeak, junco, pygmy owl. When the pine siskins come, they will be shameless. The bats have their holocaust in their Vermont caves. The pines die from pine beetles on our slopes. Some presences are not blessings; they are self-contained, invitations to investigate further, or warnings to stay away, or inscrutable, unreadable as a god is. You there, mountain chickadee, in the thicket, then hopping up my leg. You were struggling, off balance. You could flutter but not fly, a wobbling presence come out of the blue. As if you knew I would understand this as approval. Look, I have always been uneasy using the word god. It has no wind to it, like you do. It sounds like clod, self-satisfied, a fat man in an overbuilt house. A period, not a comma, which has wings. I kept returning to the window until you disappeared into the dusk. Then, nothing could lighten my mood.

Concrete language fills this poem, and when its ideas become more abstract, those ideas relate logically though unexpectedly to the surrounding imagery. The names of the birds in the opening sentence are specific and unusual enough to attract the reader’s attention, and the assonance of “least…evening grosbeak…pygmy” commands the attention of the ear. The poem continues with depressive descriptions of the natural world, the bats with their “holocaust,” the dying pines, but in these sentences too, they rhythm is tight—notice the proportion of accented syllables, much higher than in ordinary prose. In sentence five, Kwasny turns toward the abstract, suggesting a difference between “blessings” and “warnings,” though those distinctions may collapse into something “inscrutable, unreadable as a god is.” That simile startles, and it lingers as Kwasny returns to a description of another bird, the wounded one of the title. A few sentences later, she returns to the idea of a god, but it is the word rather than the thing itself she is considering, suggesting that “a god” is simply a word rather than the thing the word should signify. The speaker resists the word because of its sound, a poet’s concern, and then she describes the lack she finds in “god” through metaphor: “It has no wind in it.” Here, Kwasny introduces a bit of humor, unusual in this collection: “It sounds like clod, self-satisfied, a fat man in an overbuilt house.” We can see this “fat man,” and indeed, he isn’t terribly different from some more conventional representations of a god. Kwasny immediately returns, through another metaphor, to the apparent subject of the poem with the reference to “wings” before she concludes with disappearance.

“The Wounded Bird” succeeds finally as a poem rather than simply as a piece of evocative prose not only because of its use of common poetic devices: figurative language, concrete imagery, patterns of sound. As importantly, it juxtaposes one idea against another, the bird and god, god and the bird, without surrendering to a compulsion to explicate, without any irritable reaching after explanation, as our ancestor John Keats might say.

I admire the poems in Pictograph. They invite the reader in despite their exploration of the writer’s solitude. They encourage a meditative reading, a consideration of what it means to be alive in this world, here, now, even as we connect with those who have come before and leave our own signs for those who will come after.