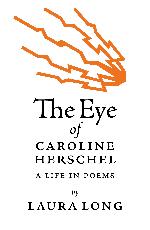 What role do chapbooks fill in today’s poetry world? Are they just pre-books, a sort of trial run until a poet writes enough accomplished poems to fill out a full manuscript and then persuades a publisher to print it? Are they worth the effort at all, since many brick and mortar bookstores refuse to stock them? They’re hard to shelve after all, since there’s no spine, no place to print the title and author’s name aside from the front cover. Although they’re generally less expensive than full-length collections, they’re not that much less expensive. On the other hand, production values are often high—as material objects, they can be attractive, pleasurable to behold and touch. And when the poems are closely linked, the chapbook can be an ideal form of publication. Such is the case with Laura Long’s The Eye of Caroline Herschel: A Life in Poems.

Consisting of 21 poems, none longer than a page, this collection is “A Life in Poems” in several respects. Most obviously, it conveys the major biographical details of Caroline Herschel, whose life spanned nearly a century, from 1750 to 1848—that her mother had determined that Caroline would earn her keep through the performance of menial domestic tasks, that she escaped to England with her brother William, that together they created precise telescopes, that she discovered numerous stars and comets, that after William’s marriage she resided in boarding houses even as she pursued her astronomical passion. More importantly, however, these poems convey the imaginative life of Caroline Herschel, at least as her imagination is imagined by Laura Long. In these poems, Herschel notices concrete detail and thinks figuratively—though for her, every metaphor leads back to the stars.

Herschel’s associative imagination is most effectively conveyed in “The Eye of Caroline Herschel.” This poem understands Herschel’s mode of seeing almost as a vocational call: “I cannot stop how I see even though / sunlight floods in to blind me.” Then the poem consists of a series of visual images, ordinary objects whose form evokes the form of a comet: “a ribbon trails //from a woman’s sleeve, the tail / of a cat slithers beneath a chair, / a bloom at the loose end of a morning / glory vine wavers from the fence // into the breeze. I stare at the flowers / erupting from green. Each blossom / is a comet sprung from seed…” We can see now how each of these tendril-like items is reminiscent of a comet. Long’s line break at the beginning of the second stanza is particularly telling: “the tail / of a cat…” for other poems will reveal the process of astronomical discovery, often focusing on the presence or absence of a “tail” following a point of light. Finally, the poem concludes with a metaphor that is provocatively layered: “Every darkness / waits to be stung open by light, as a string / on a violin waits to be touched.” A comet does open darkness, does provide form for darkness. And a comet does resemble a string—at the end of the penultimate line, readers are expecting another item in the list of visual images. But the strategy of the poem turns here. The string itself, which transforms the darkness, is also waiting to be transformed, this time by a human hand. The list of visual images is completed by an image that is auditory and tactile, and the metaphor suggests that a comet, too, perhaps becomes most resonantly meaningful through being observed.

If “The Eye of Caroline Herschel” is among the most imaginative ones in this chapbook, the most provocative poem for me is the opening one, “Caroline Talks Back to the Poets.” Laura Long knew what she was doing, of course, in placing this poem first, immediately inviting her readers to an argument. I’ve long felt superior, as a poet, to the philosophers whose language is often so abstract and unmemorable. Years ago, I read a description that distinguished between the two classes of thinkers this way: philosophers praise the light, while poets praise the moon and the stars. But here, in this poem, Caroline Herschel suggests that astronomers are superior even to poets: “The poet can sing to a lone bright star, / but we astronomers look at all of them / and the shining nebulosity between.” Oh, you misrepresent us, I want to say. And then I could point to the figurative language of the poem itself as evidence of the value of poetic expression: “Poets, attend to // the river of milk braiding and unbraiding its hair.” But I catch myself. This debate is not one I believe in after all—the argument that science or art or any other creative human endeavor is more necessary or more valuable than any other. Ultimately, I think the poems in this chapbook reach the same conclusion, but by placing this poem first, Long provokes her readers to pay attention, just as she demonstrates through the language of these poems that she has paid attention to the world around her.

The collection concludes, not with Herschel’s death as would most conventional biographies, but with a summary of her life and a bit of further advice in the voice of her ghost: “Watch the glitter drift until dawn / erases the dark. Hunger for another night.” These lines reverse the stereotypic associations of day and night with life and death, yet they nevertheless express the longing so many of us feel, the desire to receive the world again, and again.

To propose a review or submit a book for review, use the Contact link.