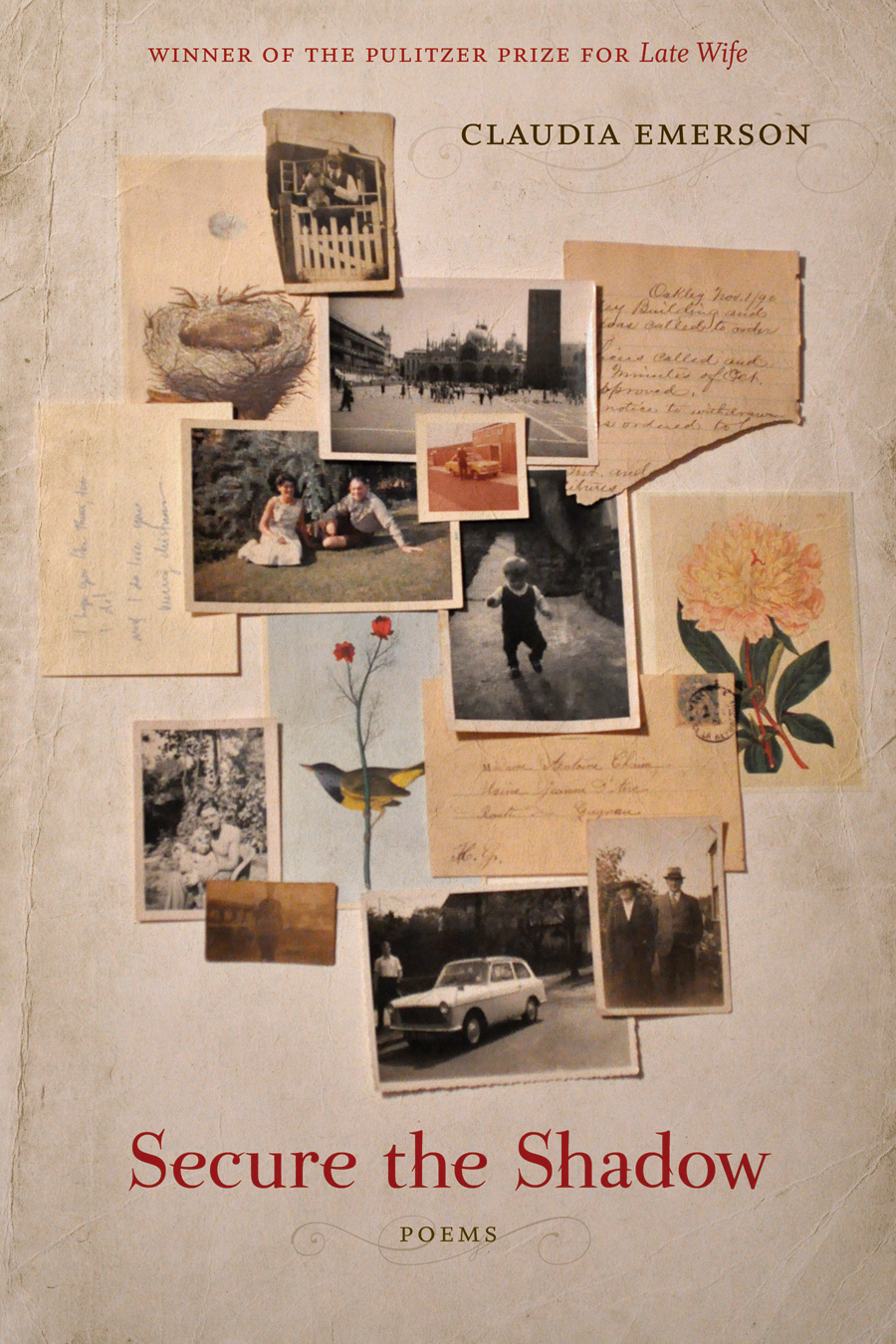 Secure the Shadow, Claudia Emerson’s fifth collection of poetry, consists of elegantly restrained meditations on memory, loss, death—of a father, a brother, anonymous strangers, various animals—those subjects poets consider again and again. Of course, all grief reminds us of our own mortality, as Hopkins insists in “Spring and Fall” and Odysseus demonstrates when he lives to hear a story of his own death. Yet knowledge of our own mortality needn’t diminish the authenticity of our memorials for others; the intensity of our grief might instead verify our willingness to forget the self. Although many of the poems in Secure the Shadow incorporate a first person speaker, that speaker remains contemplative, inviting the reader to consider what she has considered, to perceive what she has perceived. Reading this collection, our identity expands as we find ourselves among a community—of the living and, yes, of the dead.

The title poem describes several daguerreotypes of deceased children, “Secure the Shadow” a slogan to encourage the production of images. If the body decomposes, the image can remain. The instruction to “secure” a “shadow” is provocative, for a shadow, though a noun, is barely a thing. A shadow is something that is not, yet it testifies to that which is. The children in these daguerreotypes are strangers to the speaker, yet she notices their detail, their individuality. Some of the details will seem bizarre to many modern readers: the corpse of a girl dead nine days, preserved on a “desperate bed of ice”; the corpse of another girl holding a live cat; the corpses of children who have “their hands tied as though in bondage; / this is, the photographer’s notes instruct, / to prevent displacement,…” The images suggest that though each child has become anonymous, each life nevertheless had meaning, and some meaning, if not the same meaning, returns through the poem. In the last section, Emerson suggests that the images eventually collapse into types, for the poses and props repeat themselves, “rooms and windows, cradles and caskets.” The poem turns outward, for just as the types of these portraits are limited, so also are our ways of seeing: “the light / changes, fades, is lost, the pane—the lens— / darkening from glass to mirror, until / the substance of the eye sees itself / outside the self, and then can look no further.” The reader, also, seeing his or her future in these daguerreotypes, can see no further, yet it is empathy rather than solipsism that enables us to see “outside the self.” “Secure the Shadow” rests in compassion, a trustworthy trait in any speaker.

Two of the other poems have particularly stuck with me in the months I’ve been thinking about this book. Neither is as long as “Secure the Shadow,” but both explore the relationship of grief and identity. They are stylistically similar, written in couplets with indented second lines, as are nearly all of the poems in the book. This structure works particularly well in “Namesake,” a nineteen line poem of nine couplets with a single final line, nineteen lines but only two sentences; the first sentence ends in the middle of line ten. Although Emerson frequently relies on this form, “Namesake” illustrates how flexible the form can be and how adept Emerson is with the line. The poem opens this way: “While still a child, he sensed his name— / spoken, shouted, whispered, laughed, and called // and called and called—was not fully his, / having been first his grandfather’s…” The break between lines two and three, which is also the first stanza break, illustrates how Emerson complicates meaning by exploiting form. The second line seems simply a list of verbs affiliated with speaking, but then we have “and called and called” to begin line three, repeating “called” and emphasizing it, so that we pay attention, not only to the insistence of “called”—which will be referred to later as the boy sometimes refuses to heed its imperative—but also to additional meanings of “call.” To be called is not only to be identified, but also to be set apart. This boy’s calling is not his own because his name belongs to his grandfather, who died when his mother was a child. This boy is called, but only because the other one, who was also called, cannot answer. The boy can therefore never be certain of his calling.  Without the line and stanza break where it occurs, readers would not be as inclined to ruminate over this verb, recognizing its depth. Calling him, his mother longs for her own father, and so the boy experiences her disappointment when he answers. Experiencing himself as disappointment, the boy “could not know whom to rage against, // the one who called, the one who would not come.” Other lines in this poem read as units of meaning that augment the sentence’s grammatical meaning, and Emerson varies the rhythm within the lines through phrasing and caesuras so that the music remains engaging and even becomes surprising.

Another poem, a particularly short one called simply “I,” also explores the relationship between identity and grief, this time through the mind of one who can no longer express his thoughts. He can say one word only, one syllable, one vowel: “he tries again / and again, repeating the long flat i— // a needle deepening in the groove—until / his voice registers something beyond grief, // disbelief, the word having returned / to sound—oblivious elegy, that pure vowel.” The single sound, the first person singular pronoun, is elegy. The man is not yet dead, but he could not be more clearly mortal. Like “Namesake,” “I” is written in couplets, though this time as a single sentence. Nearly all of the lines are enjambed, so the poem is propelled forward more quickly than “Namesake,” though again the rhythm varies from line to line. It’s a beautiful poem, and it’s heart wrenching.

Secure the Shadow is stylistically and thematically coherent. Many of the poems are ambitious—we read, pause, reread. The poems consistently reveal a depth of meaning that compels rereading. I am anxious for Emerson’s next book, and yet also not anxious, for the poems here provide enough to engage me until then.