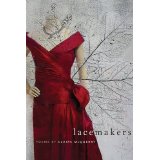 Claire McQuerry’s poems ask lots of questions, like this one, which opens “The Incorruptibles”: “Who would do that, / paint a pigeon and let it go?” Or this one, from “Your Father Takes Me Gliding above the Columbia River”: “What fault sent your life in its stuttering, / a slipped nickel’s elliptic?” Or this one, from “Miles Away”: “What did I know / about woundedness, how to carry it?” The poems don’t answer these questions so much as consider them. The reader follows McQuerry’s thinking, slowly, pleasurably, wondering at both the questions themselves and at how the speaker has come to ask them. This is a book that rewards contemplative attention.

Winner of the Crab Orchard Series First Book Award, Lacemakers reads as if it had been written much later in the poet’s career, for the poems are self-assured and stylistically adept yet also subtle. Engagingly varied in form, the collection establishes its unity through voice and motif. Several of the poems explore unsatisfying or unfulfilled relationships; many others examine spirituality and mysticism, often through allusions to traditional religious ideas. It is a book of longing, and of restlessness, and of occasional improbable contentment.

“Book of Hours,” a dramatic monologue in the voice of a medieval monk illuminating a manuscript, expresses every writer’s desire: “I’d like to believe / that these, my marks, will last, / beyond mildew and the gentle / feeding of silverfish.” The poem describes art and prayer and the art of prayer; it attends to the inner world and to the world beyond us and to the “near and nearly transparent” space between. This poem illustrates several of McQuerry’s strengths. It begins with a startling image: “Christ, the pelican, bends to blood,…” Within the next couple of lines, however, readers know how to situate themselves: “Christ, the pelican, bends to blood, / vermilion, finest strokes on lead / white. I turn from candlelight.” In medieval bestiaries, the pelican symbolized Christ because according to a 3rd-century Greek text, an angry pelican kills its young, then resurrects them by tearing at its own breast and feeding them its own blood. By the third line of this poem, we know that the monk has painted strands of vermilion across the white pelican. We want to read further, though, not only because of the compelling content, but because of McQuerry’s language. These lines contain some light alliteration and assonance as well as internal rhyme (white, light) which also forms a near rhyme with the opening potent word.  These examples are typical of McQuerry’s attention to the pleasure of English sounds. In the next stanza we read “mussel shells of milled silver— / in the ring of my lit taper. Illuminate.” And in the fourth stanza: “I will give it a kneeling Saint Michael / with silver spear and slain dragon. / For the spray work, calyx, / cusp, and sheaf.” I have devoted so much space to this poem not because Lacemakers is filled with dramatic monologues—it isn’t—but because “Book of Hours” is representative of McQuerry’s care with language, its music and its meaning. I would like to discuss it further, for I haven’t even mentioned the corpse of the calf the monk had found, how its skin has become the pages on which he writes, how its odor has seeped into his own hands—how, in other words, the work of incarnation infuses this collection. But I want to take a look at a couple of other poems too.

Although Lacemakers contains at least half a dozen other poems I’d like to discuss at length, I’ll limit myself to “Votive,” which opens the book, and “St. Margaret’s Well,” which closes it. “Votive” consists of spare couplets contrasting the effect of modern electric candles     with our more traditional expectations, flame and its residue. Electric candles are too precise to commemorate the flesh; they leave behind only “blue // on the dark globes / of your eyelids.” Yet the poem isn’t a critique of technology or of the way we live now so much as it is a recognition that the way we live now still relishes imperfection: “Some // things in life are not meant / for such precision—the snug // dovetail of your joined hands; / the bent maple outside.” Again, McQuerry explores complex themes—if life has meaning, where does it reside?—through her attention to concrete language and unique imagery. The poem is interesting to read because the speaker thinks interesting thoughts and the poet writes interesting words.

“St. Margaret’s Well” fittingly concludes the collection. It describes a particular experience—a visit to a literal English well—in order to have a final word on what has turned out to be the book’s primary theme, the relationship between the ordinary and the miraculous and the necessity of enfleshed miracles. A couple, two “pilgrims” arrive at the well, touching its stones just as a blind woman had touched its stones nearly eight centuries earlier. After she “drank from the chalice of her own hands, / …light poured in clearly through the trees.” What’s important about the story, of course, isn’t its factual reliability, but the believers’ desire to believe: “there is something about belief’s / persistence, even when myth has become / only myth.” Myths are true not because their content can be verified but because they provide us with meaning.

Lacemakers is a book saturated with meaning. I am looking forward to more of Claire McQuerry’s work.