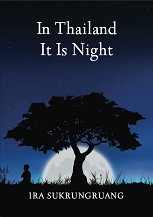 In Thailand It Is Night, Ira Sukrungruang’s first collection of poetry, is organized into four sections, each responding to a character from Buddhist mythology. They are “Garuda (Bird Creature of Buddhist Mythology),” “Phra Narai (Creator and destroyer of all living things),” “Nang Uma-devi (Mother Goddess),” and “Hunaman (God-king of the Apes).” The poems are not directly about those characters, however, but rather use them as sources of interpretation for contemporary life. This organizational scheme suggests to readers that the significance of each poem exceeds the particular words on any given page, for each poem is mythically linked to a greater universal story. There’s a liveliness to the collection due to its arrangement that would be missing (or at least reduced) otherwise.

In the opening section, nearly every poem relies on a bird or birds as a controlling image or originating impulse. The subjects of the poems, though, often extend far beyond these birds into realms of the spiritual, the philosophical, the imaginative. Sukrungruang’s rationale for grouping these poems together quickly becomes apparent to the reader, but there’s more than just logic at work here—because the poems connect through imagery rather than subject, their relationships are as much intuitive as rational. The first poem, “An Attempt to Explain Reincarnation,” is an excellent illustration of how poets explore ideas—through specific examples, via concrete images. The explanation in this poem is figurative and cumulative. It begins with an epigraph from Dean Young: “You’ve got to be a bird to understand any of this…,” and then the epigraph segues into the poem, not quite identified as a first line but functioning as the first line nevertheless, the way an overheard bit of dialogue can deflect our thinking toward destinations we might not have considered. “You’ve got to be a bird to understand any of this…,” and then Sukrungruang continues with the first couplet: “…and you’ve got to be the meadow to understand dusk, / and the growing grass to know yearning, and the heart to know waning light.” Throughout this poem, Sukrungruang manipulates his form—couplets of preponderantly long lines, sentences each beginning “You’ve got to”—by varying the lengths of his sentences and the relationship of the sentence to the stanza, so that the form is both stable and surprising. The content also is surprising. A Midwesterner, for example, will understand “that the space / between stars is less mysterious than a pasture.” Attention to the local facilitates greater transcendence than those distant objects we assume signify transcendence. My favorite line occurs a little later: “You’ve got to be born a turtle to understand time.” I would have thought that those who live quickly and die young would understand time’s flight, but no—it is the one who moves slowly and lives long who understands time’s unrolling. The poem’s conclusion returns to its original prompt, for in describing time and space, we’ve been pondering reincarnation: “You’ve got to die happily, just once, to remember all your lives.” Just once—die happily, an encouragement, a challenge.

Several of the poems in this collection are written in sections, and these poems often best illustrate Sukrungruang’s ability with form, for the section breaks frequently occur unexpectedly—in the midst of a sentence, for example—yet they consistently expand the poem’s meaning. In “Drawing Buddha,” the thirteen sections range from one to five lines each, and the lines range from two to fourteen syllables. In this poem, Sukrungruang uses line and section breaks to influence meaning, as we would expect, and also to effect turns in meaning. The poem consists of a series of instructions for drawing the Buddha, and it also illustrates the essence of meditative practice. “Start with meditating hands because the hands hold / suffering” section five begins. Section eight, the longest, encapsulates mindfulness: “Then the eyes; so much has been made of the eyes. Wide open, / the world is translucent. Half, we question waking life. Closed, / what dreams circulate / the mind? Think hard, / but do not still your hand.”

On the rare occasions when Sukrungruang writes in received forms, he adapts them to his own purposes. “Sestina” does rely on six repeated words, and it does consist of six sestets and one near tercet—it’s three full lines and then the final word of the poem, “somewhere,” on a line of its own. But the sestets are further organized into three separate sections, the first consisting of one stanza, the second of two, and the third of three. The lines themselves are extraordinarily irregular in length. So the poem calls itself “Sestina,” and it resembles many sestinas; yet it also taunts the form. It plays a joke on the form, as the opening stanza calls our attention to a standard joke: “Begin / with a joke / about the yellow / man who crossed the road / and the chicken that stood / in devouring grass.” The poem develops into an exploration of race and fatherhood and location and the ultimate worry that accepting certain cultural ideals means the joke’s on us.

Along with the first poem, “An Attempt to Explain Reincarnation,” another of my favorites is the last poem in the collection, “What I Want to Remember in the Next Life,” a prose poem which returns us imagistically and thematically to the beginning. This poem concludes: “That time never moves backwards but memory does and what was lost could be found again; that if you whisper remember, remember, you will find what it is you are looking for, like the gecko that clings desperately to the tree in a storm, trusting it won’t blow away but climb from this life to the next and to the next.” This poem, like the first, confirms that poets understand the abstract through the concrete. With its promise of more and then more, it is a fitting conclusion to this collection.