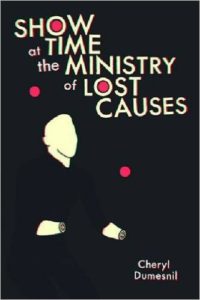 Let me just say right off the bat that Cheryl Dumesnil’s Showtime at the Ministry of Lost Causes is among my favorite collections from the last few years. I’ve been thinking about why that is, and this is what I’ve come to: the writer’s confidence in her voice. These poems are tight but accessible. Every word pulls its weight—so often in less accomplished poems, the language is hesitant, characterized by a few too many modifiers and imprecise verbs that flatten the lines. Dumesnil’s poems, in contrast, are pleasurable, occasionally because they’re overtly fun and funny, but more often because they present experience exactly and concisely. It’s not just their content but their aesthetics that reward the reader.

Most often, these poems are composed in couplets, a particularly rigorous form because the abundant white space highlights lax writing. Poems written in couplets can be spare, reinforcing their stark appearance, or they can be almost hyperbolically rich, in ironic contrast to their appearance on the page, but it’s difficult for them to succeed at any point between. Poets can get away with more in long dense stanzas than they can in briefer stanzas that will never be mistaken for paragraphs.

“Notes to Myself on the Morning after His Birth,” for example, gestures toward the catalogue, but the items it refers to are developed so fully through imagery and implied metaphor that it quickly surpasses the expectations of that form. Having just given birth, the speaker hopes to remember everything, what it felt like to notice her son’s skin, breath, aroma for the first time. She captures that paradoxical combination of awe and loss that occurs so frequently to parents:

…his body’s
plumpness in the first hours,

like a cake’s perfect rise held only
for a moment, as if on the breath

of god before the exhale—you will
never get that back. Nor will it ever

Although she will witness the miracle of her son’s breathing over and over again, she will never again be quite as stunned by the experience. The structure of this poem enhances the reader’s experience, partly because the couplets seem to float on the whiteness of the page, but also through the frequent enjambment which encourages the reader to hesitate, wondering if the meaning of the line  will shift after the break. In the excerpt above, the enjambment sometimes reproduces the meaning of the sentence, as in “held only / for a moment” where the reader pauses just as the breath is held briefly at its peak. The next line break accomplishes something similar, the baby’s breathing held “as if on the breath // of god…” Dumesnil emphasizes the subject of these lines—breathing—by breaking the line and stanza after “breath,” separating that phrase briefly from its object, “of god,” a phrase that heightens the significance of the infant’s breathing to the universally sacred. Then, the next break works differently: “you will / never get that back.” Initially, “you will” seems to gesture toward a positive accomplishment, and it is only as the next line begins that we realize the grammatical move into future tense signifies loss. But not complete loss—although the speaker will never again experience this awe in exactly the same way, the subsequent line confirms that she will always remember it.

The most poignant lines occur a few stanzas later, as the speaker begins to understand how radically her life has changed: “Mama, he warned, / you have signed on to witness / / a daily parade of exquisite / losses.” Parenting includes many experiences beyond this witness, but it never occurs entirely apart from this witness.

Throughout this collection, the speaker pays close attention to the world. In “The Flock,” for instance, Dumesnil asks, “If a house sparrow arrives on my sill, / sprig of language pinched in her beak, who am I / / to tell her no?” The “sprig of language” is one of the most evocative metaphors in the book, exploiting the habit of birds to carry literal sprigs in their beaks, juxtaposing that with the patterns of birdsong to accomplish some of the tasks of language, while also suggesting a closer relationship between humans and other animals than the characterization of humans as language-using animals would suggest. This poem concludes with imagery that indicates life is fundamentally paradoxical, that wishing it otherwise is a futile even if understandable desire: “The window-stunned robin who hunkered // on my deck for hours—that she flew away meant / one thing, that she left a red stain meant another.”

The poems I’ve discussed are thoughtful and thought provoking. I said, though, that some of Dumesnil’s poems are actively amusing, so if you’re looking for humor, be sure to read the genuinely funny (yet also poignant) eight-part “Tampons: A Memoir.” It encapsulates the experiences many of us have shared—so many of us in fact that I’m tempted to edit an anthology called Feminine Hygiene.

The control Dumesnil exhibits in the craft of each poem extends to the entire collection. It’s tone and content are nicely balanced between the internal and the external, the personal and the social, the serious and the lighthearted. I’m grateful I live in a world where this collection can exist.