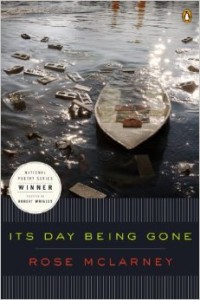 “Is the rendering of precise image a form of attention to this world or a means of departure from it?” Melissa Kwasny asks in Earth Recitals: Essays on Image & Vision (Lynx House, 2013). “Is the non-human another dimension we have been excluding or is the non-human a symbol masking a symbolic or mystical dimension, an other than earthly dimension? Do animals and plants stand for something else, and thus, lose their value as beings that exist?”

I’m reading Its Day Being Gone and Kwasny’s book in Wisconsin, at my family’s farm, in my own place of rivers and histories: Rose McLarney’s poems abound with both, and with the non-human presences of chickens, fish, dogs, cougars—her words, and the meadow I walk into every day here, making Kwasny’s questions about the more-than-human world and how to take our place, to write, within it, even more alive.

“I said I would never use animals/as the figures for my sorrow again,” McLarney writes in the book’s first poem, “Facing North,” which is, in part, about euthanizing a goat. I love this admission, its honesty, its hard look at the question of what and whom we do use in order to make things. And I love it that the next lines turn this sort-of promise on its head, as effortlessly as feelings change inside the body, and with the same dizzying suddenness:

But when the goat dropped shot,
the bread I’d brought to get her
to put her head down still in her teeth,
the chickens pecked at it.

I’m still here. I can’t stay away
from the hard images. Bread
taken from her mouth even then.

Throughout the book, these dazzling shifts: from precise seeing of the physical world to the mysterious, the abstract, the dim interior of the speaker’s mind and heart—and then back again: graceful, seamless. In “Redemption,” the lines weave between the bears the speaker’s watching and her unanswered, unanswerable questions about faith, belief, what it means to be human. “Are bears like humans,” she asks, “haunted/by deaths or the less definite and so ceaseless losses/that are love?” These poems take up Kwasny’s questions about the non-human world as image and as itself by embodying those questions: by their clear-eyed looking, their stepping back to see the bears, or the spilled organs of the shot buck in “Guts, Gleam,” twined with their stepping forward, into mysterious layers of feeling and spirit.

McLarney’s poems are like the bodies of water she keeps returning to: smooth surfaces over a deep, tangled, often contradictory, and fully human emotional life. In “Watershed,” an Appalachian river hides not just fish but trashed cars: “I swam over a wreck for years without seeing it until I grew old enough,/got long legs, and something soft and slick wrapped around my toe,/a seat belt unloosened, rotten backseat leather unfurling in current,/drawing me down to the metal below. Imagine where such/waters could let you drift.” In “Imminent Domain,” whole towns lie below a dam-created lake. The speaker, vacationing, swims above them, but she can’t stop thinking and feeling her way beneath the surface, can’t “stay away from the hard images,” can’t stop looking or writing: “My thoughts should swim/with darkness, hearths gone cold, emptied graves,/fish slipping slick-bellied over stones,/when I turn on an electric lamp.” In her fierce seeing of herself among the other people and creatures who inhabit her poems, McLarney’s speaker is both individual, etched against deer and mechanics, and woven among them, part of the same cloth.

The poems’ graceful musicality makes reading them—swimming in them—feel full of ease: I read through the whole book in one sitting. It’s the unsettled and unsettling emotional life underneath the poems’ surfaces that is difficult, often painful. In “Arcadia,” a woman burns down her own house because she’s “that desperate for something new,” while the poem’s speaker tries to do the opposite: let go of desire, purify her life, put away her own yearning for change. One of the last poems in the book, “I Float,” flips the ache for the ruined towns of “Imminent Domain” upside down: here a flooded river wrecks the speaker’s family’s harvest, but the speaker is dazzled (though she knows she should be distressed) by the damage:

The leaves wafted, the rounds
of fruits that had hung,
though ruined, were buoyant now.
Broken by refraction, they changed
to baubles I wanted.

The flood was a costumer, a jeweler.
And the way water cut ordinary sights,
that was appealing labor:
making stone toss about weightless light.

Everywhere, within and between poems, Its Day Being Gone tugs between poles: past and future, staying and leaving, finding contentment with what is and longing for something other. But because the book makes such a glowing whole, it argues for—it is—a place where those seeming opposites fuse. They will keep tugging at each other, but the poems take that tugging and turn it, miraculously, into a place to rest, a place where beauty and truth-telling offer a profound solace. In that way, they are a form of redemption.

To propose a guest review or submit a book for review, fill out the contact form.