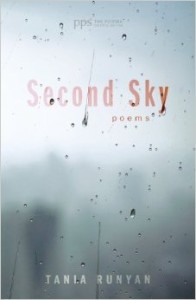 In Second Sky, Tania Runyan’s third full-length collection of poetry, she has taken a unique approach to her content—even given the fact that her previous two collections, Simple Weight (2009) and A Thousand Vessels (2011), also find their inspiration in the Bible. Here, the poems either focus on the life of Paul or respond to lines from his letters—nearly every epistle attributed to Paul has inspired at least one poem in this collection. What makes Runyan’s approach unique, however, is the relationship between Biblical verses and the poems. Nearly all of the poems include a citation, e.g. 1 Cor 1:25 or Eph 2:9 as an epigraph; when the epigraph refers to Acts of the Apostles, the poems most often respond to the life of Paul as narrated there, but when the epigraph refers to one of Paul’s epistles, Runyan uses a quotation from that verse as her title, e.g. “The Fruit of the Spirit,” “God’s Folly.” Such a strategy could quickly descend into gimmick. Runyan, however, uses these scriptural passages as points of entry, as commentary on contemporary life, just as the descriptions of contemporary life in the poems serve as commentary on the scripture. The poems acquire a richness and depth through their allusive titles; they expand the significance of the titles while the titles reveal a potentially greater weightiness to the poems.

This is not to say, however, that the poems are unrelentingly somber or simplistically pietistic. In fact, the speaker in these poems reveals her character flaws as forthrightly as I’ve seen in contemporary American poetry. “The Fruit of the Spirit” is filled with self-deprecating humor. The speaker acknowledges that, like many of us, she would find it easier to maintain her faith if God would just provide, well, a sign:

If the Spirit left me a bushel of pears
on the counter, I’d find it easier to believe
than any possession of peace

or self-control—waking without belly
dread or keeping Cherry Garcia
in the freezer for more than twelve hours.

Here is a woman after my own heart—those pints of Cherry Garcia are so small, after all, and twelve consecutive hours are so unreasonably long. The reference to Cherry Garcia plays on the “Fruit” of the title, of course, but it also aligns orthodox Christian spirituality with the trivia of our daily lives—for many of us likely do spend more time thinking about ice cream than we do about peace on earth. Cherry Garcia also points toward a brand, for if we know Cherry Garcia, we know Ben & Jerry’s, and the poem’s strategy suggests that these branded products might compose part of our spirituality. A couple of lines later, the speaker’s son “spills a lime green MegaSlush in the car.” Does the speaker demonstrate wisdom, understanding, fortitude, or any of the other gifts of the Holy Spirit, recognizing that mere objects hold very little meaning in the great scheme of things, even when they are stained lime green? Nope. She “instead bang[s] the dash: Crap! / Pay more attention!” But then she does turn to God, wondering whether her faith has ever been authentic. Jesus responds:

Come on, you didn’t say shit, He says,

And the ice cream made it past
the ten-hour mark. That’s as sweet
as peaches in August, my friend,

that’s juice running down my beard.

Jesus, it seems, is light-hearted, forgiving, fully invested in the material world. The fun of the poem emerges from the speaker’s understanding of herself and of Jesus.

Many of the poems rely on a more serious tone, even as they also demonstrate the acceptance and grace found in “The Fruit of the Spirit.” Among the poems I find most attractive for its craft is “No One Can Boast.” The first sentence exploits the sounds available in English as it also creates memorable visual and auditory images:

Aside from the article “the,” every word in this excerpt contributes to the alliteration, assonance, and consonance present in the sentence. The first line contains a series of “o” sounds, followed in the second with the alliteration of “spring sets,” which then returns to the use of “o,” this time with syllables that also function as near rhymes: “boarded-up porn store.” Then the sounds of “ablaze” are reproduced in “topaz.” The imagery reveals how transcendent even the seediest environment can seem in the right circumstances. The speaker explores this insight further in the final stanza of the poem, when the ordinary again becomes extraordinary, for no reason but that it does:

I kill the radio. Just the hum of the motor,
the pitted road, my slow, steady breath
like the syllables, Yah, weh. I didn’t work
at this joy. It just appeared in the splash
and shine of I-94, as suddenly as these Frisbees
and sand buckets in the roadside yards
laid bare by the shrinking snow.

I could spend several more pages analyzing the thematic developments of this poem—its rich with imagery, and its layered meaning rewards close attention. But I’ll simply conclude with a comment on the facility Runyan has with ordinary language—in the midst of all of this attractive imagery, she inserts straightforward lines: “I didn’t work / at this joy. It just appeared…” We’re left with a recognition of how the least significant of objects and moments can lift our spirits, of how reassured we can be by the turning of time.

When I initially picked this book up, I wasn’t sure if I was going to like it, for Paul is not among the Biblical figures I generally feel most drawn to. I suspect Runyan has read his epistles more carefully than I have, though, and thought about them more deeply. These poems are fully immersed in Paul’s language and life; they are also fully immersed in the language and life of the 21st century. Given how imaginatively Runyan has written about the Bible in her recent three books, I’m intrigued to see what she’ll do next.