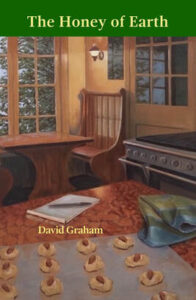 David Graham’s poems celebrate—or commemorate, really—the ordinary. Ordinary objects, people, places—though what, really is ordinary? Isn’t every memento, every person, every living creature somehow extraordinary, each in its own way? In The Honey of Earth, Graham’s third full-length collection, he answers that question with a decided yet unobtrusive yes.

“Vinegar and Fizz” consists of two parts, the first a page long and the second only 19 lines. Though both sections describe the speaker’s mother, their most significant difference is in tone, and it is that tonal difference that helps the poem achieve its greatest effect. Although the title comes from the second section, the speaker shows just how fully characterized by “vinegar and fizz” his mother is in the first section:

My mother could not be trusted
to tell it straight. She adored welshing
on a bet, spinning tales, splashing
in hyperbole’s lake.

The first line-break sets the tone for this entire section, as its misleading suggestion reproduces the mother’s own narrative habits. The language becomes increasingly playful and original—most readers, I imagine, will long to listen in while the mother is “splashing / in hyperbole’s lake.” Already by line four, we realize that it’s the story we can’t trust. The storyteller—well, we can certainly trust her to tell a good story. The speaker continues with his own mischievous language, until he recalls an astonishing moment:

….Did she
place a single peanut on my pudgy
palm for the elephant to lift with its
trunk? Of course. A touch still zapping
me sixty years later. My mother would
never turn away from any elephant,
juggler, parade, song, or barker
beating his drum of gorgeous lies.

At the beginning of the poem, I envied the speaker because his mother must have been so frequently entertaining. Here at the end of the first section, I envy him that experience feeding an elephant, that “touch still zapping” him. I think I’m engaged by the content alone, until I look more closely at Graham’s language.

The alliteration in the second and third lines above is especially effective: “place…peanut…pudgy / palm.” Interestingly, and probably coincidentally, the syllables beginning with “p” in the first quoted line are each separated by three syllables. The alliteration is pronounced, therefore, without becoming too insistent. “Pudgy,” itself an amusing word, becomes more amusing beside a description of an elephant. Here at the conclusion of this first section, we discover that the mother enjoys hearing a good story, the barker’s “gorgeous lies,” as much as she enjoys telling one.

Had it ended here, the poem would have been satisfying and memorable. In section two, however, the comedy becomes tinged with tragedy, or at least sadness, and the tone more poignant. Years have passed apparently, and the mother is being evaluated for dementia. A doctor asks her her name, which she can’t reveal, though she relies on her wit to deflect the question. Even as her future is becoming clear to her son, the doctor, and the reader, she refuses to surrender:

…then he inquires if she can say
what season. She looks around the ward
craftily: decorated tree, tinsel, cartoon snowflakes
stuck to the windows. “It’s almost Christmas.
What are you getting me?” Next he wonders
if she knows the year. She glares into his face,
allows a sullen pause….Then, “1937,” she says.

The line breaks in this stanza reinforce the content: “She looks around the ward / craftily” and “’It’s almost Christmas. / What are you getting me?’ Next he wonders / if she knows the year” all emphasize the meanings that are deferred through the break. Again, these choices don’t call attention to themselves, instead achieving their effects through subtlety.

The poem could end here also, but it continues for one more stanza, as the speaker imagines what life was like for his mother in 1937:

And so it is. She’s going on sixteen, a girl
ready to burn and roam, nobody’s fool,
a spitfire, all vinegar and fizz.

Her life with all of its dreams, expectations, hopes, and yes, sorrows, lies ahead of her, beckoning. She seems ready for anything, determined to take full advantage of this one life she has. And then the poem does end, enfolding the mother’s entire life with a statement that could refer to the girl’s attitude in 1937 and the woman’s so much later in the present:

The train is about to leave the station
for the one and only time. She’ll be damned
if she won’t be on it, and ride far from home.

I’ve read few poems that so genuinely appreciate a parent’s quirky personality and also retain such admirable warmth as that personality threatens to disappear.

The title poem, which references lines by Wallace Stevens and which is the final poem in the collection, also achieves much of its effect through Graham’s attention to sound. “We wake to winter blaze on our windows— / the world whitened while we slept,” the poem begins. The next several lines describe the landscape outside and a frosted window, one of winter’s features so familiar to those of us who live in cold climates. Midway through the poem, the speaker reveals the precise date: “If this isn’t our valentine, what is?” Creation has sent him and his audience a love note, and will continue sending it throughout the season. Then about two-thirds of the way through the poem, it turns, as so many good poems do:

Beneath the tumble and flutter of snow
lie bulbs stored in ice-lock, ready to burn
and shudder upward from their own decay,
the honey of earth immemorial.
So I send you this valentine, though it comes
and goes at once, though it kites
like a snowflake up and down, over and out.

The word “So” beginning the final sentence is particularly telling. It establishes a relationship of cause and effect between the existence of the frozen but not dead flower bulbs, whose future blossoms literally emerge from their past foliage, and the valentine the speaker offers to his listener. The “you” is both the individual listener, of course, and the book’s audience. We readers close the book, having received these last lovely words that are as much invitation as farewell.

Throughout The Honey of Earth, Graham has fun with language, but he utilizes this language to reveal some of life’s more significant meanings. He muses. He contemplates. He responds. Readers, too, can’t help but respond to these poems.