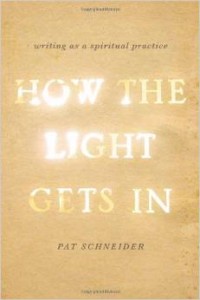 Pat Schneider’s How the Light Gets In is not exactly a memoir, although it is that. It is not exactly a writing guide, although it is that also. It is not exactly a spiritual reflection, although it is grounded in spirituality and would not exist if the author had not foregrounded her spiritual orientation to the world beyond herself, the world within herself, and her commitment to writing as both spiritual discipline and craft. Schneider is the founder of Amherst Writers and Artists, an organization that emphasizes a particular method of facilitating writing workshops. I would characterize the Amherst method as hospitable; it is particularly effective in working with community groups, although I would like to see it practiced more often in the academy also, where writing workshops too often disintegrate into competition and hostility. Schneider was able to develop her method, I suspect, because she has attended to her spirituality and has worked to integrate it with other aspects of her life. In How the Light Gets In, she explores activities directly associated with spirituality (e.g. prayer, forgiveness), emotions that spiritual honesty won’t let us avoid (e.g. fear, shame), and her personal response to them through writing.

Throughout the book, regardless of the specific chapter topic, Schneider focuses on writing as a spiritual practice. Like all spiritual disciplines, such a practice entails commitment, but more significantly it requires attentiveness. It requires an openness to surprise, an appreciation for the mystical. (In this respect, Schneider resembles many contemporary Christians who have returned to medieval devotional practices, seeking divine union more than rational doctrine.) In her opening chapter, Schneider explains it this way: “Putting pen to paper has become my most essential spiritual practice, my most effective prayer. That is not to say that writing is my only prayer, or that all of my writing is prayer. But more and more, the two acts have merged” (15). As prayer, writing is expression in search of the divine. Yet the attentiveness required of the writer is reciprocal. Schneider describes a conversation with a former theology professor, Dr. Hugh Vernon White: “his word, ‘attention,’ helped me to understand my own experience in prayer. I feel held in the attention—the companionable attention of mystery” (19). As prayer, writing moves toward mystery, the experience of mystery rather than necessarily the understanding of it.

While such a practice can appear private and is often done in private, Schneider specifically states that the writer’s connection to the mystical must open outward and become connected with the world. Schneider comes to her practice through a specific tradition, and she holds herself accountable to the demands of that tradition: “Writing as a spiritual practice, it seems to me, while it fully includes and involves the self of the writer must also include the other. The tradition of spiritual practice out of which I came, all the way back to the great prophets of Israel, stressed justice and righteousness (‘righteousness’ meaning…not a code of behavior but right relationship with others as well as with God). Those who turn toward spirit, I believe, must consciously, actively, work to turn the world toward justice” (177). This is not a book, in other words, that rigorously separates “spiritual” from “religious” or defines the spiritual as personal fulfillment in contrast to the communal engagement of religion.

That’s all very abstract, and I don’t want to suggest that this book is highly theoretical or irritatingly general. Schneider makes these points by telling her own story, describing the poverty of her childhood and the shame it brought, her struggle living with a mentally ill mother, her attempts to understand her father’s abandonment of the family, but also the figures who intervened to save her, even if their assistance was imperfect. The narrative vignettes in this book feel honest without being exploitative—of her family and friends, of herself, or of the reader. And every story, regardless of its content, returns to writing. The extended narrative portions of the book assist Schneider in conveying the value of writing as a spiritual practice, whatever other purposes it might also serve.

On one level, this book is an easy read. The prose is clear and often stylistically enjoyable. The narrator is likeable, even companionable. The material reaches out to the reader, offering an invitation. But the book is also difficult. Schneider’s honesty demands a similar honesty from the reader. Reading this book was, for me, often exceedingly uncomfortable, but only because it was so transformative.