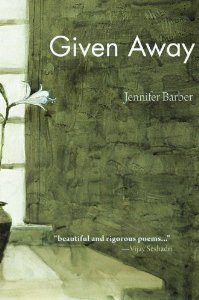 Given Away, Jennifer Barber’s second collection of poetry, is spare, meditative, thought-provoking. The poems illustrate what we hope for when we describe poetry as compressed language—for no word is wasted here, and yet the poems still invite the reader in. They are personal without being hermetic, lean without being spartan. They progress through implication and association rather than straightforward narrative, although a narrative of sorts does develop through the collection. As I read and reread this book, I found myself lingering over many of the poems, as if time were slowing, as if we—I, the poems, the speaker—could engage in a reality apart from time, even though the poems trace the speaker’s movement through time.

Barber accomplishes this paradoxical effect through her skilled use of the line, her fearless hospitality to the white space surrounding a poem, and her confidence in the power of the concrete image. The poems reveal their subjects as one deceptively quiet observation follows another. I found myself repeatedly startled by the accuracy of the poems’ references to the material world, and by the juxtaposition of objects I had never before experienced together.

Motifs of separation and connection dominate this collection. It opens with a poem called “Away,” and another poem of the same title opens section three. Section two concludes with “Three Days Away,” and the book closes with the title poem “Given Away.” Other titles also refer to this theme, “Proximity,” for example, and “Arriving When It Does.” The poems themselves explore the boundaries between one thing and another—light and darkness, language and silence, breath and air, a human being and God. And though we name separation—afternoon, evening, night—the poems often situate themselves in that moment when one thing is indistinguishable from the next.

The opening poem “Away” begins this way: “I count to twenty / and back. // The first day of the world, / light slanting through the trees, // though cities have been / built and destroyed / and rebuilt, / pollen and lamentation filling the air.” Obviously this poem is not set on the very first day of this world, regardless of which culture’s creation story one adopts. Yet the light slanting as it does recalls a beginning, even as history has intervened to create and destroy. The final line of stanza three, “pollen and lamentation filling the air,” evokes both hope in a future and grief at the past. Hope and despair are not quite balanced, however, since hope rests in the natural world and the “lamentation” proceeds presumably from human activity. The next stanza, consisting of a single line, returns us to the speaker’s present and also to stillness, to a consciousness of “is” rather than a concern for either building or destroying: “Not here. Quiet reigns.” The poem proceeds imagistically—a carpenter bee, a field of sheep, a hummingbird “who seems a twig from here.” Finally, the poem concludes with a metaphor that is, if not exactly ominous then modestly oppressive: “the wheel of August touches down.” This poem has stayed with me because the speaker is so attentive to her world. The poem is receptive to the things of this world, yet it permits them to remain what they are, translated into language, yes, and occasionally described figuratively, but not themselves reduced to handy metaphor.

As the collection proceeds, the references and vocabulary become increasingly Biblical, yet the poems are not, for the most part, overtly about Biblical passages. Instead, they demonstrate how the language of one’s tradition remains a living language. “In the Hebrew Primer” is a good example of Barber’s strategies. Much of this poem consists of a list of words, concluding with a simple conjugation of a simple verb, yet these sparse words reveal everything the reader needs to know. “A man. A woman. A road. / Jerusalem” the poem begins. It continues: “Nouns like mountain and gate, / water and famine, / wind and wilderness / arrange themselves in two columns on the page.” Studying a lexicon of a particular text is, of course, very different from studying a complete language, and if we were to study the Hebrew Bible, we would expect vocabulary like “famine” and “wilderness,” words that wouldn’t ordinarily show up on early vocabulary lists of a foreign language class. Yet a Hebrew Primer might also include words like “feast” or “riches” or “sabbath”; Barber’s selections imply a narrative that will be fulfilled by the end of the poem. The next stanza considers the other significant part of speech: “The verbs are / remember and guard; / the verbs are / give birth to and glean.” The concluding couplet circles back to the beginning while revealing where the beginning was headed: “A woman, a man. / I was, you were, we were.”

I appreciate Given Away for both its craft and its content, if those two categories can be separated. The language is absolutely controlled and absolutely natural. The poems are best read slowly, line by line, over a period of hours or days. And then when you close the book, you’ll want to begin again, as the world does moment by contemplative moment in these poems.

To propose a guest review or submit a book for review consideration, fill out the contact form.