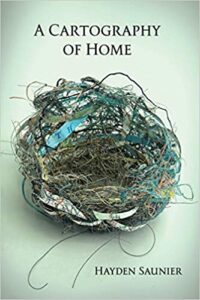 A Cartography of Home is the perfect title for Hayden Saunier’s most recent book. “Home” because the word evokes connotations of rest and comfort—connotations that are both confirmed and challenged in this collection—and because its definition is so expansive. “Home” can refer to the house you sleep in each night, but it can also refer to the place you’re from, where you belong, and to the earth itself, even the universe. And “cartography” which refers to maps, a way of seeing, but also to the entire scheme of mapmaking—what is emphasized, foregrounded, distorted in the reduction of a three-dimensional object to a two-dimensional rendition of it. A Cartography of Home reflects on all of these ideas and questions in poems that are both accessible and layered.

“Men Walking on the Moon,” for example, opens with the most mundane of scenes, people watching television, but then proceeds to a metaphor that questions whether any of us can ever, really, feel confident in our homes:

We were remembering the night in 1969
how young we were, how blue the TV screens,

when someone said it was the only time
she ever heard her father talk about the war.

The good war, ended years before a man
walked on the moon. We turned our faces,

candlelit, toward her. She said that when
he saw the first man’s footprint deep

in lunar dust, saw how the tread had stamped
its pattern clean and hard into the soft

white surface and nothing stirred,
he shook his head and said,

That’s what the ground was like at Nagasaki
when we were sent in afterward.

Our boot prints sank in ash.
And that was all he ever said of it.

The couplets here lend some control to the chaos of nuclear destruction, and they mirror the father’s restraint. The metaphor is effective because we are all so familiar with that lunar footprint, a symbol of some kind of human achievement that seems almost quaint fifty-some years later, an image that on its (literal and figurative) surface seems uncomplicated, “its pattern clean and hard into the soft / white surface…” We are also familiar with imagery associated with nuclear bombs, but that imagery consists of mushroom clouds or the imprinted shadows of evaporated human figures on rocks. Saunier links those two events here through an image we might not have associated with Nagasaki, “Our boot prints sank in ash.” Thematically, we could link war to space exploration through technology, which so often results in destruction, even if unintentionally. In this poem, though, the two are linked through their human consequences, a man who can’t forget even if he doesn’t speak of his memory, a man for whom the triumph of a moon landing evokes the horror of nuclear war. Nuclear destruction felt as otherworldly as lunar exploration. The image is accurate—we can see the boot print; we can feel our own foot sinking into ash—and it is startling. Now, as a reader, I will recall Nagasaki every time I, too, see a photograph of that lunar boot print.

Another poem, “Standard Conditions on Earth,” also relies on the ordinary to examine those facts we can’t understand, particularly mortality. The speaker explores the idea of standardization, beginning with standard units of measurement: “Here, one kilogram is equal to 9.8 Newtons” and “We calculate standard pressure at sea level; // standard temperature at zero Celsius. Neither / can be seen, just measured, just endured.” This last line here hints toward the poem’s conclusion, which will discuss more significant things that can’t be seen. Until then, the tone of the poem shifts from neutral to comic (“Cold-stunned iguanas drop from trees // when temperatures fall near freezing, / whatever scale one uses, and those poor lizards // never see it coming, which seems funny to us”) to mournful (“Massive ice sheets break away, locusts chew // through miles of millet fields in Kenya, cracks / splinter dams, rust eats through steel, // erasure, birth, mutation, death, tornados, / my neighbor’s memory gone overnight”). Although the idea of a standard is obviously constructed, the facts of decay and disappearance are not. As much as we might understand how decay leads to new growth, the possibility of our own unique disappearance remains incomprehensible. Despite all of the poem’s foreshadowing, its conclusion still comes as a surprise:

Standard to try to measure how much dust
what’s disappeared kicks up. Standard too, for us

We’ll each drop, just like those poor lizards who never saw it coming. Any comedy evoked by this second use of “drop” is decidedly darker, as readers are forced to consider just how different we might be from “Cold-stunned iguanas.” This poem relies on specificity, as so many good poems do, and also on slightly quirky bits of information—how many readers would have known that a Newton is a unit of measurement? I particularly appreciate the sonic devices in this poem, the alliteration, assonance, and consonance, along with the rhythmic variance. There’s the comparatively soothing repetition of m and l sounds in “miles of millet fields,” immediately followed by the harsher “cracks / splinter dams.” These lines rely almost exclusively on monosyllabic words, permitting an abundance of stressed syllables, followed by a line that speeds up by incorporating polysyllabic words: “erasure, birth, mutation, death, tornados.” This line, consisting entirely of nouns, suggests that these events occur without an actual actor, without the locusts or cracks or rust that chew and splinter and eat. We reach the final couplets, acknowledging our own inevitable disappearance, though still denying it, converting that knowledge to song, which is made of breath, which is what proves we’re still here. Although this poem is not written according to a strict metrical form, several of the lines take advantage of meter, moreso as the poem progresses. “Standard Conditions on Earth” is a good example of contemporary prosody; it echoes the tradition, neither shackled by it nor ignorant of it.

Both of the poems I’ve discussed are written in couplets, but throughout the collection, Saunier relies on many other forms. Some of the poems are organized into tercets, while others consist of a single longer stanza. Some of the lines are justified left, while others are indented. A few of the poems approach form more experimentally. So while Saunier seems to find couplets, for example, congenial, her choices are informed by all of the options available, and the poem’s form, every time, enriches its content.

A Cartography of Home is an attractive and thoughtful collection. Its poems challenge us to redefine what we might think of as mundane. They consider the present in light of both the past and future. As you go about your own days, thinking of so many of them as so common, these poems will rise to remind you how indistinct the boundary is between ordinary and extraordinary.