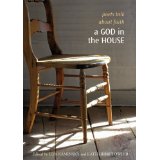 A God in the House: Poets Talk About Faith collects nineteen pieces in addition to the editors’ introduction; the approach both to topic and to format is unique. Contributing poets include those we might expect to hear from on matters of faith (Alicia Ostriker, Christian Wiman) as well as those whose work might first come to mind in other contexts (Carolyn Forché); they include well-known poets who have been publishing for decades (Gerald Stern, Grace Paley) and also younger poets closer to the beginning of their careers (Jericho Brown); and they include poets whose spiritual practices range from Christian (Marilyn Nelson) to Muslim (Kazim Ali) to Buddhist (Jane Hirschfield) to Pagan (Annie Finch). Each of the pieces originated as an interview by the editors, but because the editors have chosen not to include the actual questions, the pieces read like hybrids between interview and informal essay. This choice serves the collection well; straightforward interviews can become stilted on the page, and readers are often more interested in the answers than in the questions, for poets and other writers generally manage to say what they want to say regardless of the particular questions they’re asked. I found each contribution engaging, and I found something to ponder in each one, whether or not the contributor’s poetic or spiritual practice resembles my own. I was most pleased to see that each poet’s contribution concludes with a poem, often prompting me to pull one of their books from the shelf or to seek out their recent work.

Each piece begins with a quotation from the interview serving as an epigraph. One of the most intriguing comes from Kazim Ali: “Prayer is a form of panic, because in prayer you don’t really think you’re going to be answered.” Perhaps our poems become articulated answers to those prayers, the words we can hear once our panic subsides. Writing sometimes feels like that to me, a rhythmic breath settled into the heart of chaos—but that’s my experience, not one I want to imply is common to the poets included in A God in the House. Though maybe some would agree.

Ali’s contribution, “Doubt and Seeing” describes an experience shared by many writers I suspect, that of rethinking one’s aesthetic identity once readers begin to respond to one’s work. “To call oneself a spiritual or religious poet seems strange to me,” he says, “but once my first book came out, and I started doing readings, people would say to me, ‘You’re a religious poet.’ I decided to consciously explore the topic more in my second book, but I never planned to be a religious poet” (33). He suggests that his next book will be less overtly religious, but it’s hard to imagine that it won’t be at all religious. Of course, “religious poet” isn’t all that Ali is; it isn’t the entire identity of any of the contributors, but each contributor does seem to be consciously—maybe even intentionally—aware of the spiritual components of his or her being.

Several of the contributions foreground autobiographical experience. Occasionally this material will be known to readers who’ve already been immersed in the poet’s work, but often the material is more personal, more intimately honest than we will find in other sources. In “Not a Butler to the Soul,” G.C. Waldrep describes his experience with mainstream Protestant denominations as well as with Mennonites and Amish communities. His exterior life changed, almost against his will it seems, as his interior life shifted:  “one does not invite the Holy Spirit into one’s life and expect it to operate on one’s own terms…I gradually, quietly started making the cultural changes I had long dreaded, not because I wanted to, but because I couldn’t bear any longer not to make them” (187). Because it’s virtually impossible to separate one’s artistic vocation from one’s spiritual life, Waldrep experiences the two as conjoined but not identical: “The question I more often ask myself is not about the relationship between faith and poetry, but rather the relationship between prayer and poetry. They’re not the same…though there is some intrinsic relationship. Sometimes I speculate the two are like adjacent apartments in the same building: when you’re in one, you have no direct access to the other, but if you listen closely you can hear sounds—sometimes muffled, sometimes sharp—coming from the other side of the connecting wall” (181). His metaphor feels accurate to me, and much more satisfying than the frequent claim that poetry is prayer or that writing is praying, even if writing is for many of us a spiritual practice.

Eleanor Wilner, however, comes closer to describing poetry as prayer in “Natives of the Earth,” though what she actually says is that the act of writing poetry shares certain characteristics with the act of praying: “insofar as the poet must relinquish a certain kind of control, and attain a kind of self-forgetfulness; must, as the ancients had it, call in the Goddess, the Muse, the power of the imagination—that which must be invited and cannot be commanded—in that sense, in which prayer involves a humbling and earnest entreaty for vision, and a creative deepening of perception toward a kind of ease of being, then okay, the difference begins to fade” (223). The difference fades, as differences can fade between reading and thinking, between writing and being. Yet fading is not vanishing.