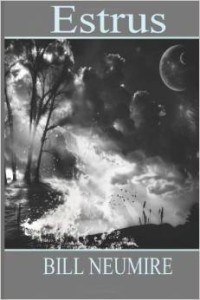 Reading through Estrus, Bill Neumire’s first full-length collection, I was both puzzled and intrigued. Rereading it, I felt my intrigue heighten, as I began to understand the logic of his craft, yet I seldom anticipated the choices he’d make next. His language often feels more detached than personal, even when a first-person speaker enters the poems, as if the writer has examined each word for its interest, the way an artist might examine each tile before inserting it into a mosaic. The poems often rely on facts about the external world for their controlling images and metaphors, and his language is both precise and surprising. The poems suggest more than they state directly. They are tantalizing—accessible word-by-word and sentence-by-sentence, yet I often felt as if I hadn’t quite grasped their full meaning. There is enough going on with rhythm and image, however, to reward rereading, and eventually the relationships among the various components become clear. I often felt that unique delight of recognizing another poet accomplishing something I wouldn’t have thought to try.

“The Arctic Tern,” one of the earlier poems in the collection, is written in free verse though clearly influenced by the sonnet. It consists of an octave and a sestet, and there is something like the sonnet’s turn between the two stanzas. Here is the first stanza:

Fact: The tern sees more daylight than any creature on earth
as it turns at each pole before the end of each summer.
At both white ends of the world there is a warmest moment,
a courtship hour when the right dance
can catch the right eye. In therapy this flight
is called avoidance. In archetype this is called the quest.
In science, migration. In a song
this is the refrain.

Neumire opens with “Fact” here, but he interprets that fact from the beginning, steering away from the apparent objectivity with which he begins. Terns are astonishing for their extreme migrations, but for the purposes of this poem, the migrations are important because they are linked by sunlight and warmth, despite our association of the poles with cold. Subjectivity enters early on, in other words, becoming obvious by the “courtship hour.” We might think we know where this poem is headed now, but we’ll be wrong, for interpretation depends on context—the therapist’s office, a discussion of depth psychology, the ornithologist’s lab, the musician’s keyboard. Reading this poem, we might immediately assume that the tern will function as a symbol, but if its flight serves as metaphor, lines five through eight warn us away from too presumptive an interpretation. I appreciate how Neumire juxtaposes two meanings from related disciplines but with such divergent connotations: “avoidance” and “quest.” Then he seems to revert to the objective, to the extent that we are willing to grant science objectivity. And then he concludes with the possibility that is most surprising to me: “In a song / this is the refrain.” It’s the pleasing return, the delightfully familiar bit upon which the rest is built. How is this so?

The second stanza seems to introduce an entirely new metaphor:

Once, overwhelmed by a patch of strawberries,
I spent the whole day running
from the biggest berry to the next biggest, stuffing
them in my red-stained mouth with my red-stained hands
not for fear of their vanishing but for the taste
that was everywhere in me.

How is a patch of strawberries related to a tern’s migration pattern we might ask. This stanza adds an additional interpretive layer to the list of possibilities from the first stanza. This poem doesn’t mourn scarcity—it’s not a fretful commentary on the limits of polar survival—but rather celebrates abundance, of strawberries, yes, but also implicitly of arctic warmth. The speaker’s ingestion of the strawberries is driven not by gluttony but by astonishment. The last line suggests how fully we merge with the world, for just as the speaker is in the world, the world is also in him. And the “fact” that permits this integration is the recognition of abundance.

Many of the poems in Estrus rely on the sort of context-less fact that begins “The Arctic Tern” as their impetus, facts that could seem like bits of trivia more suitable for a game show than a collection of poetry if Neumire weren’t in such control of metaphor. Some of the most effective poems that rely on this technique are “Think of the Bioluminescence You Do Not Emit,” “It’s the Hour of the Helpless Horse,” “A Stitch of Facts,” and “Beached Pilot Whale.” Each of these is written in conventional poetic form, with lines and stanzas, but the collection also contains several short prose poems that also achieve their purpose through the incorporation of unusual bits of information. “The City’s Pediatric Emergency Room” is one of them, and it is also one of the most moving poems in the collection. Neumire’s often matter-of-fact tone paradoxically invites the reader’s emotional response:

This morning the pig-tailed, corduroy-legged neighbor girl was erased by a red Mazda obeying the limit. She’s still there, though, like a De Kooning erased by Rauschenberg. In a box of facts, I found that one can tickle a penguin into a shattering chuckle & that babies’ eyes all begin blue. There are men in chimneys today & streets being named after berries which were named after scientists who were named after saints. Can we go on? Apparently, for the shifts are turning at the paper mill: night to graveyard, graveyard to day, manufacturing calendars with empty boxes for all your plans.

Until the last two prepositional phrases, this piece reads like an accumulation of arbitrary facts, intended to demonstrate the reality of chaos or even nihilism. Yet, the end suggests, we go on with our lives, making our plans, penciling in our commitments, as if we control our future, as if we won’t be “erased by a red Mazda obeying the limit.” There’s no one to blame for this tragedy—it might be meaningless, as empty as the boxes on a blank calendar. And yet we can’t ignore this girl, even if she’s been written over by a “box of facts.” The poem achieves its effect because it delays its sense until the end. Neumire obviously understands not only the rhythm of individual lines and stanzas, but also the rhythm of meaning as he reveals and withholds and reveals.

I’ve enjoyed reading and thinking about this collection. Many of the individual poems were originally published in such respected literary magazines as The Laurel Review, Salamander, Saint Ann’s Review, and Rattle, so Neumire obviously has readers. I hope this book will garner more.