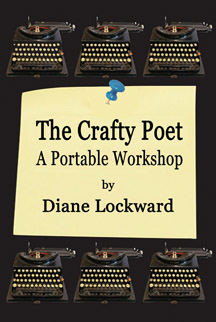 I didn’t know I was looking for Diane Lockward’s The Crafty Poet: A Portable Workshop, but I sure am glad I found it. I’ve benefited from Lockward’s newsletter and blog over the last few years; many of the poetry prompts featured in her newsletter have encouraged me to think about language differently—attentively, curiously, mischievously. Her newsletter is an act of generosity that few of us could sustain for as long as she has (though I assume she also has fun with it). I’ve written some poems I would never, ever, ever, ever have written without the challenge of her prompt. What I have appreciated about her prompts, and what I appreciate about the book, is the detail and complexity. She extends her prompt well beyond the first expected instruction; she assumes her audience consists of working poets.

Like many of us, I own many books on poetic craft, and I’ve found almost all of them useful in one way or another. But mostly these days I find them more helpful for my students than for my own work. Lockward’s prompts are challenging, though, because they’re inventive. And they’re inventive because she uses poems by other poets as the inspiration. She reads those poems carefully, noticing the elements that are just peculiar enough to intrigue writers who’ve been at it for a while.

The book is organized in ten chapters. Each chapter includes two or three “craft tips” from other writers, ranging from Kim Addonizio to Jane Hirschfield to Jeanne Marie Beaumont to Vern Rutsala and many others. Each craft tip is followed by a poem and a prompt inspired by that poem, followed by poems written by Lockward’s readers in response to the prompts. We see, therefore, not only that the prompts work, but that they inspire dramatically different poems by different writers. Each chapter also includes a feature called “The Poet on the Poem”; here, Lockward prints a poem and then interviews the poet about the composition of that poem. Then each chapter concludes with a “Bonus Prompt.” The Crafty Poet, in other words, is both craft book and anthology, but its unique characteristic is the direct relationship between the included poems and the exercises.

For example, in the chapter on “Voice,” Lockward begins with a poem, “Post Hoc,” by Jennifer Maier. “Post Hoc” plays with cliché to establish tone. It starts this way: “It happened because he looked a gift horse in the mouth. / It happened because he couldn’t get that monkey off his back. / It happened because she didn’t chew 22 times before swallowing. / What was she thinking, letting him walk home alone from the bus stop?” The poem uses enough repetition and variation to keep us engaged; it lets us think we know where the poem is going, and then it turns a corner we hadn’t anticipated. Toward the end of the poem, we read these lines: “Why, why, in God’s name, did he run with scissors? / If only they’d asked Jesus for help. / If only they’d asked their friends for help. / If only they’d ignored the advice of others and held fast / to their own convictions,…” The first instruction in Lockward’s prompt after this poem is just what we’d expect: brainstorm some clichés. We might even anticipate the second step: recall some pieces of advice. Many of us might stop with the combination of those two instructions. But Lockward’s prompt continues: “Use at least three different repeated sentence beginnings…” And “Use lots of questions and alternate them with declarative sentences.” And then finally, “You might use a different Latin phrase as your title.” The prompt is complex and contains enough different instructions that all of us could start somewhere—and all of us could be led where we might not otherwise go. This is what I mean when I say her prompts are both challenging and inventive. The sample poems that follow, by Kenneth Ronkowitz and Ingrid Wendt, illustrate how this prompt encourages both wit and reflection.

Even the craft tips are thoughtfully complex, much more than the word “tips” might imply. Wesley McNair offers not one but “Ten Tips for Breaking Lines in Free Verse.” Each tip focuses on a different purpose—meaning, rhythm, mood, shape. The final tip could be added to every piece of writerly advice: “Believe these tips and don’t believe them. Let the feeling life of your poem be the final authority.” Take seriously the insights of other writers, but not too seriously. Take seriously your own intentions for your work, but inform your intentions with the practices of others.

Reading through this book, I find myself torn by competing desires: to linger over many of the poems, and to rush to my desk to try the prompts. A book that inspires me to do more than is possible—what a good book that is. I’m glad The Crafty Poet found its way to my hands, and I’m looking forward to leafing through my notebook in a year or so, counting up the poems that owe their conception to this book.